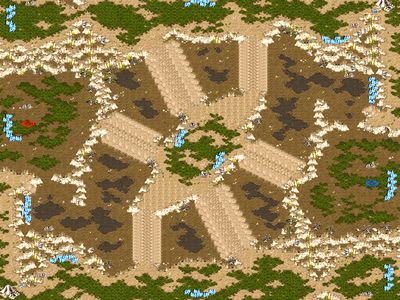 The third can be somewhat difficult to take as the walking distance is rather far, but the backdoor route into the third makes this a less drastic effect than it would otherwise be. Taking a fourth is a bigger problem, as the options for a fourth gas are directly above your opponent's base, in the center, or along a direct line from your opponent's natural. Map control is extremely important to securing resources on this map. Counters are relatively common, with a more mobile army counterattacking into the natural instead of directly engaging a less mobile army pushing along the other path.

Terran are more likely to open pure mech or go for a bio-mech (MnM + goliath) play into crushing/denying the Zerg’s third base while mitigating any muta damage risk. Pure bio play lends to some unfavorable situations with mutas and lurkers abusing the advantage that the ridges give. Terran also needs to be careful when pushing at a Zerg’s natural as its likely that the Zerg will break its own backdoor and follow up with a hard flank on the Terran troops.

Lurker openings or mutas into quick lurker transitions will likely be common routes for the Zerg. The high ground ridges need to be controlled by the lurkers and put the Terran in a soft contain position where they would have a hard time pushing up towards the Zerg base before science vessels are out. Meanwhile, with all these multiple points of entries the Zerg can go for lurker drops into the Terran main.

With how hard it is to get a fourth base (fourth gas), it ends up with the Zerg going for more aggressive plays like hydra busts or aggressive lurker contains/lurker drops into the Protoss main. Like it or not, we might just end up seeing a whole lot of 3 hatch hydra busts if it comes to this map.

Corsair/DT (maybe even sair/reaver) would become the main choice of play for Protoss, provided they don’t get too greedy in getting that third base as the Zerg is extremely likely to go for that aggressive playing style that would totally punish any sort of greed. Should the Protoss manage to make it that far, however, his primary goal would be to split the map and gain the economy advantage as the Zerg would have a hard time doing the same.

Protoss will likely try to capitalize on the early game advantage by any way possible to take advantage of the map terrain, be it through gas steals or cannon rush on the high ground behind the natural, proxy reavers at either the middle area or at the third of the terran, or just proxy gates and crush the Terran outright if he's going for a fast expand opening. Protoss is likely to avoid playing the super late game map split situation since it’s a two player map, which means less ground to be covered for a slow moving mech army and lot more tank coverage.

Terran’s goal is probably to survive the early game and make that map split situation possible. They can either opt in safe play by factory expanding and defending against the Protoss opening or go on the offensive themselves with a 2 factory timing and put the Protoss on the defensive. Vulture drops are also pretty common and an extremely effective harassment play to keep the Protoss busy while Terran takes its third/fourth -- the Protoss would try to just go for a break should they scout the Terran being greedy with these expansions.

Note: In the 10 o'clock position, once an Assimilator starts building, the wall is no longer ling-proof and an extra probe between the gas and forge is needed to seal it.

These wall-ins allow Marines and Zerglings to pass through. Zealots will be unable to go through.

These wall-ins allow Marines and Zerglings to pass through. Zealots will be unable to go through.

Note: On both positions, once a Refinery starts building on the gas geyser, the wall is no longer Ling-proof.