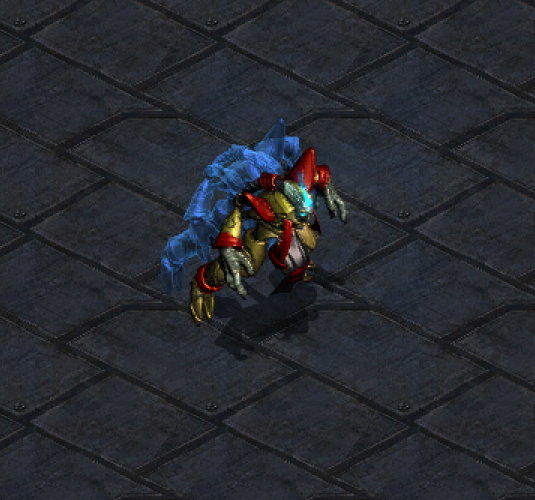 The High Templar is a Protoss spell-caster unit. It is considered one of the most powerful non-attack units in the game due to its Psionic Storm. The High Templar does not deal any direct damage. It has a low number of hit points and is therefore a prime target for being sniped by opponent troops and should be defended carefully as a result.

High Templars are produced at the Gateway and require an existing Templar Archives before it can be warped. The High Templar's main ability is the Psionic Storm, which must be researched at the Templar Archives. This spell deals large amount of damage over time under its area of effect. Psi Storm is very powerful against concentrated armies, particularly those with health less than 112 hit points, as this is the damage dealt by the Psi Storm. The Psi Storm is a critically important weapon in the Protoss arsenal, especially against Zerg and other Protoss opponents. It is also powerful as a harassment technique when High Templar are used in combination with a Shuttle, as worker units die in less than half the lifespan of a Psionic Storm. Combine this with its large area of effect and two well placed Psi Storms can easily clear out an entire Mineral line.

In games this is commonly done when a High Templar runs out of energy, both to add usefulness to two energy-less casters and to prevent them from dying from being sniped. This is also used in early game, when the slow High Templar would be too vulnerable if used in an attack. A merging Archon cannot be loaded by a Shuttle.

High Templars are very slow and fragile units and therefore need to be protected. When engaging an enemy army, it is preferable to send in attacking forces first to take hits from the enemy while the Templar follow close behind and cast Psionic Storm on the enemy. Because Psionic Storm has such a large area of effect, it is usually wise to cast it on concentrated groups of enemy units. Magic Boxes can be used to spread Psi storms over a wide area.

High Templars are highly effective in all match-ups, but must be carefully protected as it has no attack and moves slowly. These support units are often transported in a Shuttle or as part of a large Protoss ground force.

High Templars are the mainstays of Protoss armies, being able to cut through large swaths of opposing Zerg forces. Templar are considered the direct counter to any Hydralisk-heavy Zerg build, as Psionic Storm decimates the massed Hydralisks, and particularly so when they are clumped together.

In strategies such as the Fast Expand builds, Protoss players will stall for time with Photon Cannons until they reach High Templar technology. High Templars are used in virtually all PvZ games, and they keep their utility throughout the entire game. Additionally, High Templar can be fused to make Archons, another commonly used Protoss unit against Zerg, especially in the late-game.

In addition to being used in standard army compositions, High Templar can also be used to harass mineral lines by dropping them to the enemy resources, and Psionic Storming the Workers. Even when destroyed during the drop, the lost workers and production time can be very disruptive to the Zerg.

High Templar are often used in standard Protoss armies when engaging the Terran. Psionic Storm is the most often used spell, punishing poorly placed Siege Tanks with a highly damaging attack which helps the Protoss player come out ahead in ground engagements. It is a good idea to create space between High Templars if the enemy has Science Vessels using EMP, which entirely depletes energy and sheilds, rendering the High Templars temporarily useless. Care must be placed not to lose the Templar to Vulture snipes, however. Additionally, High Templar can be used to harass the enemy economy, with Storm Drops being effective tools to keep the Terran player on guard.

Hallucination is rarely used, however if one chosen to do so it would be primarily to clear minefields. Mass hallucination of Zealots can be effective, if these hallucinated Zealots are sent in before the real army to clear any defensive mines the Terran has set up, and hopefully drag them into enemy tanks, dealing damage. Without having to contend with mines, the Protoss has removed a significant burden from any army engagement against a Terran. Hallucination is also used sometimes as part of a finishing move involving a mass Recall into a Terran main. Against a heavily fortified Terran main, players will sometimes Hallucinate their Arbiters, allowing attacks to be diverted to the Hallucinations so the real Arbiters can recall a Protoss army into the base, destroying production facilities and leaving the Protoss with a marked advantage.

High Templar are a staple of mid-late game PvP armies, providing devastating area damage against opposing Zealots or Dragoons. As in other match-ups, High Templar can be used to assault the enemy economy, devastating mineral lines with one or two carefully placed Psionic Storms. When High Templar come into play, Shuttle micro with Reavers becomes far less useful.