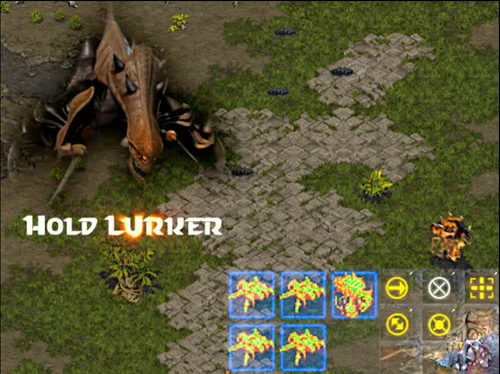 Lurkers by default do not have the "Hold Position" command and will automatically attack any enemy units that come within range. "Hold Lurker" is the technique of preventing Lurkers from attacking enemies until commanded to. Occasionally this is referred to as "Stop Lurker", after a deprecated method of accomplishing this (see below).

There are several ways to accomplish this:

Since Lurkers do area-of-effect damage in a line from their location, it is more beneficial for Lurkers to start attacking when a group of enemy units is already inside that area. This way, they will hit more units and do more total damage, even if the enemy tries to run away. An attentive opponent with decent micro will immediately retreat at the first sign of Lurker spines, thus limiting the Lurker's effectiveness. Using Hold Lurker will ensure the Lurker can do maximum damage against the opponent as it will be too late for him to escape. 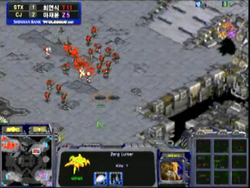 This is the standard method for Hold Lurker. This technique is done as follows:

2. Select the Lurkers along with an Overlord

3. Use the "Hold Position" command on the whole group

4. Once you want the Lurkers to attack, simply issue an attack or stop order

A common question about this technique concerns its legality in competitive play. In almost every StarCraft tournament to date, Hold Lurker is legal. Similar tactics such as allied Mines are deemed to be illegal as it involves changing your diplomacy.

Events where Hold Lurkers are considered legal are: