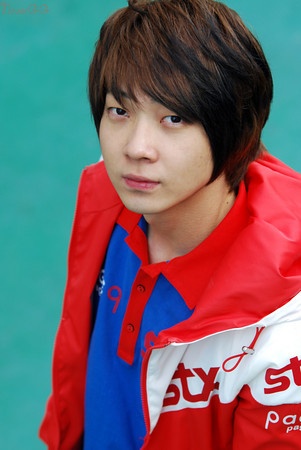 Hwasin has long been the star player of STX, but only recently in the 2008-2009 season he started to lose that image. Known for his good looks and excellent TvZ, Hwasin had become a prominent and leading Terran player in the 2006 to 2007 season. In the beginning of his career Hwasin became most known for having a very good vs Zerg match-up (earning his nickname "the red sniper" since red is typically the color associated with Zerg), but in 2007 he started to pick up his other two match-ups and won the Korean WCG tournament that year. Hwasin also makes a habit of never reaching the finals of a tournament but losing to the eventual champion of it, as has happened in the GOMTV S2 MSL (to Bisu), the ClubDay 2008 MSL (to Bisu again), and the Lost Saga MSL (to Luxury). Recently in the SPL 08-09 season Hwasin has entered a bit of a slump and has severely underperformed in Proleague, specifically vs Terran opponents. He has gone from being on his team's lineup every week to appearing only once or not at all each week. Despite his performance in Proleague, he is still very successful in individual leagues, and reached the Ro16 of the Avalon MSL and the Bacchus OSL 2009 before being eliminated.

Hwasin started the 09-10 Proleague season as consistently as usual, finishing the round with 2 wins and 3 losses, one of which was an ace loss to Stork. Hwasin qualified for both the 2009 Nate MSL and the 2009 EVER OSL. After losing his opening two games in the OSL, Hwasin cannot qualify from his group, but he could affect whether or YellOw[ArnC] reaches a tiebreaker or not. On the final day of the round of 16, Hwasin's sloppy play on Fighting Spirit allowed YellOw[ArnC] to win, leaving a three way tie at the top of the group and knocking out Hwasin, 3-0. Despite this, Hwasin continued his strong MSL streak by qualifying for the round of 32, passing his group second, by beating Shine twice. This marks the ninth consecutive MSL Ro16 appearance for Hwasin. He is due to play Guemchi who thumbed down Odd-Eye for their match in the round of 16.

The series was played in the standard Split Day format. In the first game on Ultimatum, Guemchi attempted to DT drop Hwasin but lost his shuttle to Hwasin's turret ring. After this loss, Guemchi never recovered and lost to a simple push from Hwasin. In the second game of Fighting Spirit Hwasin's bunker rush took out Guemchi's early nexus which left the game relatively even. After a pause from the Kespa referee delayed the match, the game resumed and shortly after, Guemchi's attack was defended by Hwasin and he was forced to gg allowing Hwasin to pass to the Round of 8 where he will face team-mate Kal. At the time of the match, they had never played a televised game against each other. Kal was victorious in the first game of the series and both players admitted afterwards that neither player was practising for the series and that they were focusing on proleague.[1] Hwasin won a long macro game in set two on Match Point, but Kal won the following two games to knock Hwasin out in the Quarterfinals.

Following his good MSL, Hwasin became a more common sight on the STX roster and finish 4-1 in Round two of the proleague, playing a key role in STX's 9-2 result in round two. This gives Hwasin a 6-4 record going into Winner's league.

After qualifying for both the Korean Air Starleague and the MSL 2010 Season 1 (yet to be sponsored) some people doubted the capacity of Hwasin to make it out of his Ro32 groups. Hwasin’s condition during Winners League, where he barely made appearance, questioned his play and thus doubts arose wether he would make a Round of 16 appearance.

On the Starleague Hwasin was paired with Stork, Movie and Baby, where much to fans’ dismay his TvZ would not shine. Stork and Movie’s PvT seemed like a threat to Hwasin, as both players boast an impressive condition in this match-up. However on Day 1, Hwasin took Movie down, standing 1–0 in his group along up-and-coming Baby who, after beating Stork on the first day, is yet to test Hwasin’s TvT.

On the MSL Hwasin faced JangBi, FireFist and ZerO. Hwasin easily won in his games with ZerO and FireFist, displaying his precise timing pushes and impressive multitasking, all while remaining with a calm gesture on his face. Thus, Hwasin advances 2–0 to the Round of 16.

Later in 2010, it was discovered that Hwasin was involved with the Match Fixing Scandal, and was permanently banned from progaming by KeSPA.

The tournament was canceled on August 23, 2015 after intense fan displeasure and Kongdoo requesting their players' withdrawal.[3]