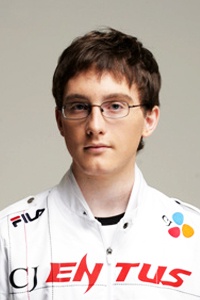 Greg "IdrA" Fields is a StarCraft progamer from the United States who played Terran for CJ Entus.

He is currently retired, he used to play Zerg in StarCraft II.

Greg Fields is a professional computer game player from New Jersey. Fields plays StarCraft by Blizzard entertainment for the progaming team CJ Entus (sponsored by CJ Corporation, whose products are food retail and distribution, and entertainment) in South Korea. He uses the alias "IdrA", originally inspired by the Hindu mythological character "Indrajit". Fields chose this path over attending Rensselaer Polytechnic Institute on scholarship to study theoretical physics, and has been relatively successful in South Korea, having performed well and won the majority of tournaments he's participated in.

After one of his biggest accomplishments to date – winning the eSTRO SuperStars tournament –, the Terran player IdrA was given the rare opportunity to be a part of the Korean progaming team eSTRO. Several months later, IdrA was given a progamer license and sent to CJ Entus in an effort to spread foreigners amongst the progaming teams (the American Protoss player NonY had also recently joined eSTRO).

During his time in Korea IdrA has racked up a notable amount of foreigner tournament wins, such as the ESWC Masters, ESL Major Series and the GomTV Valor tournament. He is also the first foreigner since Lx in 2006 to have played in a televised progaming match, losing 2-1 to the Protoss player Trap.

Since his arrival in Korea, IdrA has been a major favorite in every foreign tournament he has entered. In 2009, he won several major foreign tournaments. Of his competitors, only Ret was consistently able to match IdrA's increase in ability. The two met in the finals of the ESL Major Series, Season IV on the 2nd of August 2009. Ret, coming from the lower bracket, had to win two best-of-5 matches in order to win. He claimed the first one 3-2, but lost the second 1-3. At Blizzcon 2009, Ret knocked out IdrA 2-1 in the lower bracket after both lost to Korean professionals.

In October 2009, Ret was invited to play with the eSTRO team. In an interview about going to Korea, Ret was asked what excited him most about his new life. Ret answered:

IdrA has been received by the community as generally bad mannered (bm). Though not unanimous, IdrA has been known to get angry at the end of lost games and reflects it via his chat messages. Many of his lines at the end of games have often been quoted by the community. Most notably, "you're really good at making carriers[.] very useful talent toi [sic] have" or "Isn't it funny, you won without doing a single thing".