Iloveoov arrived onto the progaming scene after being recruited along with other promising talents RainBOw and Sigamari onto BoxeR's new team in 2003. They would be joined by players such as kOs and Kingdom (and later Mumyung and Terato). Legend has it that iloveoov caught BoxeR’s attention by defeating him online with all three races on Lost Temple. As an amateur iloveoov played all the races and had an account over 2000 on Game-i with each race. He was especially noticed for his Zerg play, but his bad manner had prevented previous teams from recruiting him. After gaining his pro license and seeing the need to focus on a single race, however, iloveoov ended up picking Terran as he believed that it was the only race with which he could consistently beat NaDa, who was at that time tearing up the leagues.

Iloveoov rocked the Brood War progaming world as soon as he joined Boxer’s pro team. He entered the 2003 TriGem MSL where YellOw had thought that by dispatching NaDa 2-0 in the winner’s finals he would finally be able to take home a Starleague victory. Instead, iloveoov clawed his way through the loser’s bracket after a first round loss to NaDa himself to overwhelm him 3-1 in the loser’s bracket finals and then the perennial punching bag YellOw 3-0 in the Grand Finals. He followed this initial splash with two more MSL championships much in the same way as Nada before him had conquered 3 KPGA Tour in a row, powering over Nada 3-2 in the finals for 2004 HanaFOS CENGAME MSL (having only dropped one other game the entire tournament) and Kingdom 3-2 in the finals for 2004 SPRIS MSL.

At this point in iloveoov’s career one should look to how game-breaking his play style was in order to reach win percentages unachievable even by Nada. Early in his career iloveoov had a ridiculous 25-0 TvZ streak. It’s important to remember that iloveoov is named bonjwa not just by a magical run through a single tournament but by dominating his opponents thoroughly for a significant period of time and sweeping Starleague caliber players 2-0, 3-1, and 3-0 in sets. Iloveoov’s play could be characterized as devastating macro backed up by some of the best defense in the history of StarCraft. With a distinctively “low” APM of around 250, iloveoov used his superior game sense to outmacro each and every opponent if undisturbed. Earning nicknames of “Cheater Terran” for having impossibly large armies and “Bus Driver” for taking his opponents "on a trip", perhaps the scariest part of iloveoov at the time was that he also seemed uncheeseable. Adversaries who feared iloveoov’s unstoppable macro also failed in early gambits to pierce his ironclad armor.

While cruising through SPRIS MSL in mid 2004, iloveoov landed himself into both the Gillette OSL and the short-lived iTV Ranking League. This was somewhat accidental because the preliminaries for the OSL had proven very difficult to work through and he had instead focused his practice on MSL maps where he found great success. In the Gilette OSL, iloveoov found himself the target of the previous OSL Champion Nal_rA who picked him in his group as the deadliest player he could find. Nal_rA had torn through the previous OSL with high level strategy and perfectly timed builds. For the first game of the Starleague iloveoov faced rA down on Requiem, a virtual TvP nightmare, and showed off his excellent defense anyhow as he first deflected early zealot+cannon cheese followed by dark templar drops and then artfully uses dropships to strike at rA’s main for the GG. Meanwhile iloveoov was performing unspectacularly in the regular iTV tournament (ranking 9th before the final round) only to display his why he was the scariest player in the world at the time and win 9 straight matches (against the players ranked 2 through 8) to advance to the finals against new sensation JulyZerg. JulyZerg would live up to his hype by pounding iloveoov in early July 2004 in the iTV finals to stop him at his first finals and then again a week later in the OSL semifinals which JulyZerg would win, giving it renown as the "Game That Broke the Streak".

Denied his Royal Road trip and reeling from double losses to JulyZerg with people questioning whether iloveoov’s reign had ended, iloveoov came back with a vengeance in the EVER 2004 OSL. EVER 2004 was one of the more memorable OSLs as the final 8 included six previous OSL champions, YellOw, and iloveoov. On his route to the finals against his mentor BoxeR, iloveoov took down the fiercest opponents at the time including GoRush, NaDa, and Reach (to whom he lost a macro war for the first time only to come back and stop 3 cheeses). A nail-biter of a series, iloveoov was 2-2 with BoxeR ahead in the final game only to get away with an un-scouted expo and rise to victory, made bittersweet by beating his mentor. At 2004 You Are the Golf King MSL iloveoov would drop his nemesis JulyZerg 2-0 only to lose both in the Winner’s and Loser’s bracket to another opponent who seemingly countered him, XellOs. 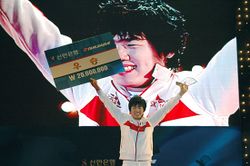 As sAviOr’s reign started in the MSL, iloveoov meandered around the following OSLs, succumbing to the OSL winner’s curse in IOPS (losing again to JulyZerg), being taken out in EVER 2005 OSL by XellOs, and falling to the eventual So1 OSL Champion Anytime 1-3. Winter of 2005 arrived and iloveoov could taste blood, placing 3 relative no-namers in his OSL group and then demolishing Boxer 2-1, Casy 3-2, and even JulyZerg 3-0 (who was on his quest for the Golden Mouse) in the finals of the ShinHan2005 OSL to join the elite group of players with multiple OSLs. Throughout 2005 and 2006 iloveoov displayed his versatility as a core part of the SK Telecom T1 2005 Proleague team that won three finals and dominated the regular seasons. In 2008, he retired to a player coach position in SKT1 due to an injury to his wrist and lack of motivation which had plagued him throughout 2007.[1]

Iloveoov is easily the most influential player in StarCraft strategy and through his strategies has significantly affected the balance between races, setting the standard many times for modern Terran play in 2003, 2006 and 2008-9 as a coach. Oov has invented a number of new builds for his pupil, Fantasy. The Fantasy Build revolutionized the Terran vs Zerg match-up and brought forth Mech TvZ and half a year of Terran domination over Zerg. The iloveoov build is a TvP build crafted by iloveoov to combat Protoss builds that counter the Double Armory build. The iloveoov Fake Mech was conceived in response to the Zerg adaptation against the Fantasy build and allows a Terran to choose from a traditional Bionic TvZ or a Mech TvZ.

The table shows iloveoov's overall record as of January 3, 2008: