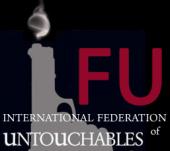 The International Federation of Untouchables (iFU) was a strong and successful foreign team in early 2010s. The majority of its members were from Russia, Europe and South America.

The team was founded by ZerGgBoY, BMW, gOgna, InqubE, Baga, Maix, Rise, eXistenZ, Hemke, spx in April 2008 and was originally known as NiceAff Poker BW Squad. With the addition of experienced players over the year and the top foreign teams disbanding iFU became one of the top competitors in most clan leagues.

iFU maintained a fierce rivalry with LRM) or LRM)Evolutions.