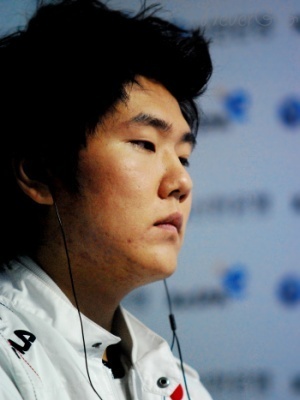 Byun "Iris" Hyung Tae is a former StarCraft progamer from South Korea who played Terran for Air Force ACE. He is also commonly referred to as Berserker. He currently plays in amateur leagues.

He played Terran in StarCraft II and was a coach for AZUBU.

Iris was the captain of his team CJ Entus. Iris was well known as one of the most aggressive Terran players in the professional scene, and was a prominent member of CJ's Terran line, being the only other Terran on their lineup besides his Teammate Skyhigh. Iris recently had a large upsurge in results, coming in 2nd in the GOMTV Classic Season 3 losing to Flash and reaching the semifinals of the Avalon MSL where he lost in a close series to teammate Kwanro.

During Mid 2009, Iris was having a 'Second Spring' after his 2007 Daum OSL run. He reached the final of the GOM Classic S3 tournament, which he lost 1-3 against Flash and qualified for the 2009 Avalon MSL Ro4 (against teammate Kwanro) after defeating Bisu with a score of 3-2. He also played a vital role in CJ Entus' Proleague success, where they placed 3rd overall.

After this peak, he started the 09-10 Proleague season, Iris finished round 1 with the disappointing stats of 0 wins and 3 losses. He was seeded into the 2009 Nate MSL but was knocked out his group 1-2 in the round of 32 after losing to Saint twice. In round two of Proleague Iris appeared rarely, once again taking a backseat to young Terran Skyhigh. In his two appearances, he scored 1 win and 1 loss to bring him to a 1-4 record going into Winner's league.

After retiring from Starcraft 2 Iris started playing in Brood War Tournaments and streaming on Afreeca. He played in the 8th SonicTV Starleague and the 11th SonicTV Starleague though he never managed to advance from the initial group stages dropping out in the Ro32 and Ro24 respectively.

In 2016 Iris advanced to the Ro24 of the Afreeca Starleague Season 2 after losing to Firebathero in the Seoul Qualifier by defeating PianO in the next qualifier which was held in Busan. His ASL 2 group included By.Maru, Mind and hero. After only winning against By.Maru but losing to hero and Mind Iris dropped out of his group in third place.