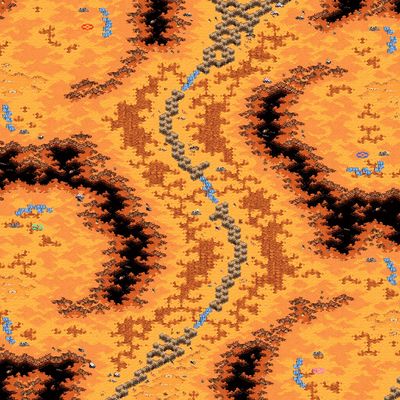 Iron Curtain was arguably the most popular 2v2 map in the progaming scene, and definitely was a fan favorite. The map is very unique and plays quite differently compared to the majority of 2v2 maps. The most striking feature of the map is that there is a divide that splits the map into two. This dividing wall contains three mineral lines allowing units to be glitched through.

As the map is symmetric under 180° rotation, it can be positionally imbalanced. Protoss/Zerg is strong if the teammates start on opposing sides of the map; typically the Protoss will proxy gates on the mineral line, while the Zerg will 9 pool. Terran/Zerg is strongest when both teammates are on the same side, as the Terran can turtle the middle expansion with Tanks, denying their opponents a third gas.