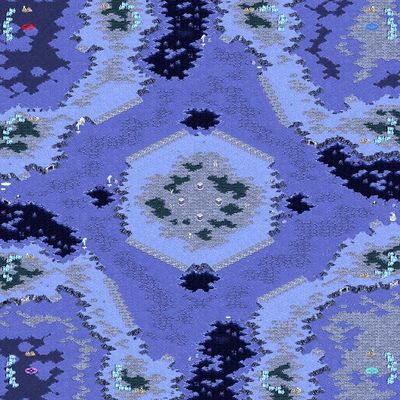 At first glance, (Neo) Jade in many ways resembles standard four-corner main base maps like Fighting Spirit or Circuit Breaker, which also share the nearby third base, but NJ does exhibit some notable features of its own. For example, the main is located on a lower elevation, making it vulnerable to attack, particularly from range units. This forces players to take their naturals early lest they run the risk of being contained in their main and fighting up a ramp.[1]

A long natural ridge connects the natural to the third, making it easy to take an expansion and to defend alongside the natural, because the ramp typically contains reinforcement troops. The main attack path is a single narrow ramp that can be defended if not blocked. While they are easy to take, these thirds have low value gas geysers (only 1500 gas).

Plays fairly standard for the most part much like on any other four player map like Circuit Breaker or Fighting Spirit. Zerg players are left with a choice of either getting that really easy third base (with that additional high ground advantage bonus) at the cost of having to deal with a base that will run out of gas fairly quickly or taking another main/nat that will provide a full geyser and an easy to take fourth but will be harder to defend. With the numerous ridges and elevations, it is common to see lurker-only or lurker and swarm play, particularly around the center and the natural/third connecting ramps. Also, muta openings are common because of the vulnerable natural and thirds, with exposed ridges around those bases.

In Terran’s case, should the Zerg take the nearby third it would lead to some heavy resistance making for a more tank-heavy push. If the Zerg takes another main/nat, it will call for a more SK Terran push to take down the third before going after the natural. Terran will often wall off at their natural, as the wide ramp connecting the natural/third is much more difficult to close. On offense, Terran will commonly drop M&M forces on the main, as it is lower ground that is enclosed, and it can inflict significant damage before reinforcements arrive. The Zerg third would be vulnerable to siege tanks from below the ramp, while the wider ridge would make it difficult to advance because Zerg can surround and swarm incoming Terran armies.

Zerg play is largely standard, and consists of either expanding at the close third or expanding cross map at another natural. The economic boost enables them to play aggressively against Protoss: should the Zerg player take the natural ridge of the Protoss player, they can immediately push into the Protoss player's natural with hydras while simultaneously dropping lurkers into the main from the attack. Alternatively, Zerg can play defensively by taking another natural expansion as a third and then easily take the main as a fourth while defending the third with static defenses and a good sim city setup. Lurker play will be frequently seen with the many ridges at the natural, third, and center; lurker drops are also common at the nestled naturals and thirds.

Protoss has to rely on being defensive and playing harass most of the time with DT/Reaver drops harassing the Zerg economy and distracting the army while transitioning into storm play. FE openings are common, with the wall at the natural choke, while the Zerg natural and thirds are more vulnerable to the previously mentioned drop harass than the large wide-open main. Once in the mid to late game, the map resembles other larger maps like FS, with the Protoss keeping a deathball army mobile.

With a variety of elevations and large spaces, Protoss can pull off just about anything for early game trickery. Proxy gates, proxy reavers, and even early gateway pressure builds can cause a lot of trouble, especially if they force the natural to lift off. At that point it is an uphill battle for the Terran player because the Protoss player has a high ground advantage over the main.