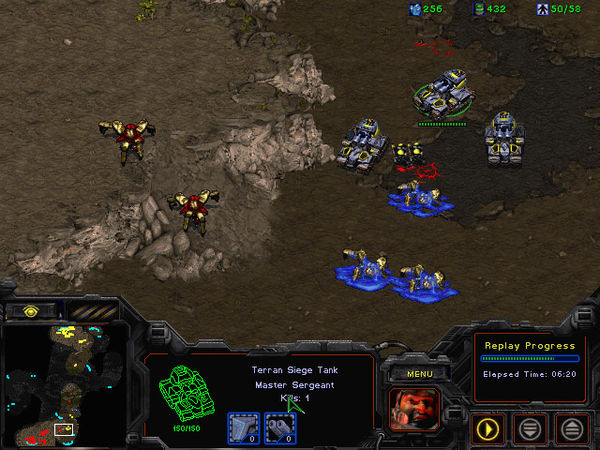 This build originates from the Korean qualifiers for the WCG 2003, where the Korean progamer JoyO caused quite a stir by running through almost all of his Protoss opponents with the same build. The build and variations of it are still seen in progaming today. It is a very aggressive build that is very effective against greedy builds, but it's not as economically solid as standard 1 Factory Expansion play.

The build centers around making a push with three siege-less tanks, about five marines, and rallying Vultures with Spider Mines and speed. If Protoss has expanded, the goal is generally to shut down the expansion and force Protoss to make more units, setting him behind economically. If the Protoss is a weaker player, there's also a good chance the rush will end the game.

This build is similar to the Gundam Rush, but the way the attack is performed is very different.

Learning JoyO is easy. Don't try to memorize the exact build order, but instead, focus on a few concepts:

Good micro is critical once your units reach the Protoss base. You want your Marines just in front of the Tanks, and the Tanks should be lined up perpendicular to the direction in which you are attacking. The Tanks will be doing the majority of the damage here.

The most important part of this strategy are the Vultures. You need to micro them to come in and lay aggressive Mines close to, behind, or even amongst the Dragoons. This will cause the Dragoons to move back while trying to snipe the Mines. Good Protoss players should be able to avoid these Mines to a degree, but the key here is to distract the Dragoons by threatening them with the Mines while allowing the tanks to do most of the damage.

If the map has a ramp and the Protoss backs up to it (surrendering any expo attempts for the moment) you can either try to push up with Mines/Tanks and try to finish him off, or you can keep your Tanks outside the expansion for a while with Mines just down the ramp. This will make it difficult for the Protoss to push out and get his much needed expansion.

If your rush went well, the best transition would be to get an early expansion. Do this during your attack when you have 400 minerals and still can afford Supply Depots for your Vultures.

It is imperative to make an Engineering Bay pretty early, as Shuttle builds and Dark Templar builds are strong against Two Factory. it is safest to start a Bay before your expansion Command Center.

None if you adapt your build correctly.

This is a pretty good counter. It defends easily, and allows the Protoss player to expand quickly.

Is a decent counter, especially if the Terran is prevented from scouting it.

Is a good counter if microed well, the Protoss player should be able to stop the attack down his ramp.

While it may seem safer than 14 Nexus, the 1 Gate Nexus gets later Gateways and less units against the JoyO Rush.

There might be a problem for the Protoss player to defend this without sacrificing his expansion, but sometimes a good Protoss can take advantage of the early economy boost and out-produce the Terran rush, as the timing comes slightly later than optimal against the 14 Nexus build order.

Try to force the Protoss up his ramp, and keep him there for as long as possible. Retreat if there are too many Goons.

Try to force the Protoss up his ramp, while attempting to make him cancel the Nexus (or kill it if it is already built). If you are able to delay or kill the Nexus, you will have a big advantage.

If Protoss player uses his shuttle with Reaver for defense, the best option is to back off, build an Engineering Bay, and focus on getting your own expansion up.

If your opponent flies to your main with the Shuttle, you have a good chance to break into the Protoss main. He should have a low number of Goons, and all his main should die. Even though Terran might lose many SCV, the Terran generally wins in this scenario.

If Protoss went fast Dark Templar, focus on getting your own expansion up. Mine the DT's path so that none can get into your base before your Engineering Bay is done.

Your best option is probably to try and end it quickly, cut SCVs to make your rush come faster. Don't mind about the Protoss expo, push up his ramp and try to kill him off. Optionally, bring down SCVs to help fighting.

This build is strong to play as a bit of a surprise in a best-of-x series. If Protoss expects a Fast Expansion play you are likely to do a lot of damage with the first attack.

On the other hand, if the build is used to often, or the Protoss expects it, it's pretty easy to stop.

The key is often to disguise this build as a Fast Expansion build causing the Protoss to get too greedy.

The JoyO rush is effective on maps where:

Here are three replays where JoyO is performing the rush himself during the Korean wcg qualifier 2003:

Here is a modern application by Sea[shield] during the TL Attack S02E02 July/2008: