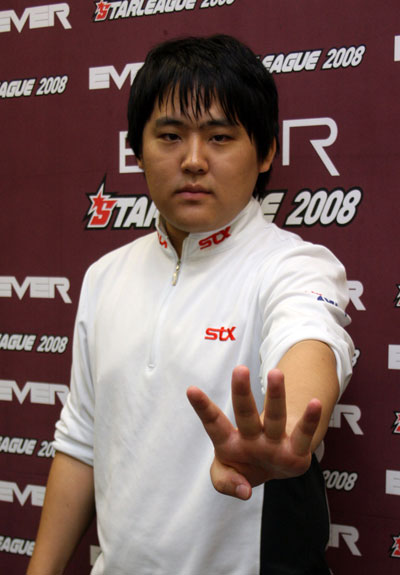 Park "July" Sung Joon is a StarCraft progamer from South Korea who played Zerg for STX SouL. He currently is the head coach of Longzhu Gaming's League of Legends team.

July has always been a strong force in the pro-scene, even when he first started playing on the team Pirates of Space. Despite being a very solid player, he didn't make a name for himself until the Gillette OSL, where he won the semifinals 3-2, beating iloveoov in what became a famous series. From here he went on to defeat Reach 3-1 in the finals, not only making him the first Zerg to win an OSL, but also a Royal Roader. July surprised the viewing public during the finals when he arrived with dyed red hair, a green shirt, and a red cape. This was known as the watermelon incident.[1]

He quickly became a dominant player of the time, winning the 2005 EVER OSL, the KT-KTF Premier League and the iTV Ranking 7th League. He also made another OSL final which he lost 3-0 to Nada.

Nicknamed Tushin (The God of War), July is famous for his aggressive style. He became famous for unmatched supremacy in Mutalisk micro, which became his trademark early on in his career (although recently his muta-micro has been overwhelmed by newer Zerg players).

After reaching yet another OSL final in early 2006 and losing 3-0 to his old rival Oov, July lost his dominance and went into a small slump. In 2007 July and Pusan fell into contract disputes with MBCGame. Both felt that pay cuts despite MBCGame winning the 2006 SKY Proleague Grand Final were uncalled for. Pusan eventually settled with MBCGame and signed a new contract while July asked to be placed on a waiver. Eventually, SK Telecom T1 picked up July on an impressive salary. The contract also included bonuses for winning Proleague matches. The goal for SKT in hiring July was to boost their Proleague performance; this did not happen. July performed poorly in Proleague but continued to post very good results in the individual leagues.

After a year, July was released from SKT and picked up by STX Soul in 2008. The transition had an immediate effect on July's play and it was noted many times how much he enjoyed the new atmosphere at STX. July's form skyrocketed, and he ended up winning the 2008 EVER OSL over BeSt with a 3-0 whitewash. This earned July the 2nd Golden Mouse and he became the first Zerg to win the Golden Mouse. After winning EVER2008, July's form declined once again and has not managed to pass the Round of 16 since. He is still statistically one of the best ZvPers in Korea, holding the highest ELO rating for the majority of 2008, but his ZvZ has fallen greatly, with a 26% win rate since EVER 2008. July was made captain of his team in the Shinhan Bank Proleague Round 4, but in round 5 the team's captain changed again to SoO. July reached the semifinals of the GOM Classic Season 3 where he lost to Flash 0-3. He then went on to lose the 3rd place match against EffOrt 1-3, narrowly missing out on a place at Blizzcon 2009.

July did not play in round 1 of the 09-10 Proleague, with zergs Calm, by.hero and Modesty being played instead. He qualified for the 2009 Nate MSL, but was knocked out in the round of 32, losing 1-2 in his group. Uncharacteristically, both losses were to Stats, an inexperienced Protoss.

As of June 2010, July has seen little action on television. Despite qualifying for the Ro32 of the Hana Daetoo Securities MSL, he once again was eliminated in the group stages, going 1-2. July failed to qualify for both seasons of the Korean Air OSL and recently failed to make it out of his MSL Survivor group for the Big File MSL (going 0-2). July has been off the A-team of STX SouL since 2009, and has not played a proleague game since May 2009. In 2010, July transferred to StarCraft II and became one of the founding members of StarTale.

Shortly after being discharged from the military, July joined the Kongdoo company. He began streaming Brood War in August 2015, competing on the Fish Server.

In competitive touraments he has had minor success. In the VANT36.5 National Starleague July advanced to the round of 16, along the way unexpectedly beating Shinee, a strong Terran player, who opted for a proxy factory play that was countered. In the end he lost to EffOrt and ZerO, getting eliminated from the tournament. His run in the Spotimes Starleague Season 2 ended similarly. He managed to surprisingly defeat free in the Ro32 by counterattacking with hydras after initial midgame zealot aggression. Again he was stopped by better established players, Mind and Jaehoon in the Ro16. July in the 41 Starleague Season 4 was defeated by Last 2-0, and subsequently lost to relatively unknown Protoss, Hint, in the Ro32, getting eliminated from the tournament. A month and a half later on January 1, 2016, July posted on his Afreeca channel that he was tired from streaming too often the past two weeks. He wrote he would take a break before streaming again next week before abruptly going inactive. July has since left Kongdoo and become the coach of Longzhu Gaming's League of Legends team. 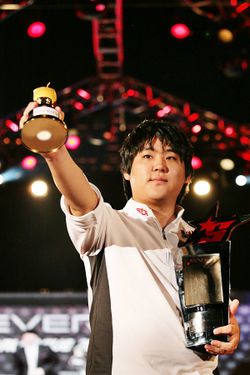 iloveoov is often considered July's greatest rival. They have met 25 times in their careers, with the score being nearly tied up at 13-12 in oov's favor. July was the first Zerg to ever beat oov in a televised match (known as "the game that broke the streak" to many), and he won that series 3-2. July and iloveoov met again in the 2005 Shinhan Bank OSL where oov decisively beat July 3-0. The two played against each other was in the Korea WCG 2006 semifinals where oov emerged victorious, 2-1. They also met in the worldwide WCG finals of that year where oov won again. July and oov, although rivals, have become good friends over the years. When July left MBCGame in 2006, oov being on SKT T1 was not a small factor in July signing with them (and in fact at one point they were SKT T1's 2v2 team). Their last game against each other was in the GOMTV MSL S2 where July won on Python. They have not played each other since oov retired and came back as a player-coach.