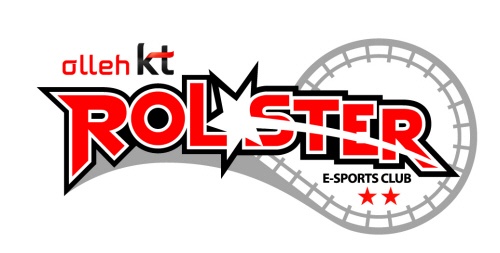 KT Rolster is a Korean StarCraft professional team. The team was formerly known as KTF MagicNs. It was a StarCraft team until 2012, when KeSPA switched to StarCraft II. The team disbanded its Starcraft II roster on October 18, 2016[1]. It now only has a League of Legends team.

KT Rolster (formerly KTF MagicNS) is one of the oldest progaming teams and longtime rivals of SK Telecom T1. Founded as Raptors, they became KTF MagicNs in 2001, then KT MagicNs near the end of the 2008-2009 Proleague Season, changing their sponsor from subsidiary KTF to parent company KT. At the end of the season they changed to KT Fingerboom for a little while before settling on KT Rolster (short for Roller Coaster).

Since their sponsor is rich, KT is famous for buying many strong players, leading many to compare it to the football club Real Madrid. In their first Golden Age, KTF's roster featured greats and Starleague champions such as YellOw, Reach, Nal_rA, Sync, TheMarine, Chojja, and Goodfriend. Despite their star-studded lineup featuring many Starleague finalists, they were unable to defeat their rival SKT in the 2005 SKY Proleague Grand Final. Soon, many of KTF's top players began aging and a rapid decline ensued. Many were forced to enter the Air Force, such as YellOw and Reach, while others simply retired. During this time, KTF Coach Garimto tried to make a comeback into progaming, but was met with failure.

During these dark days for KTF, a new star began to rise: Flash. Soon, he began to carry the team on his shoulders, with little support from 815, Lucifer, Tempest, Sair, and Hery. KTF managed to finish in a middling position thanks to Flash's meteoric rise, including his win of the 2008 Bacchus OSL; this led to the nickname "KTFlash," since Flash would often have to win both his match and the ACE match for KTF to win. Soon, however, KTF began to flex its financial muscle again, acquiring MSL champions Luxury and fOrGG, both of whom had defeated Flash convincingly in individual leagues--EVER2008 OSL and Arena MSL, respectively. Unfortunately, this deadly combination was never to materialize as both Luxury and fOrGG slumped and Flash was again forced to carry KTFlash on his shoulders.

Only until 2009 did KT finally begin producing homegrown talents such as Violet and later Stats, thanks largely to the coaching of H.O.T-Forever. Luxury and fOrGG would also sporadically perform well, usually when the other did not, but this was enough to begin easing some of Flash's burden. Upon the beginning of the 2009-2010 Proleague Season, something finally clicked as Flash, Violet, and Luxury led KT to a 10-1 record. Throughout the 2009-2010 season, incredible play by Flash, supported by wins from Violet, Stats, Luxury, and fOrGG, led KT to a #1 position at the end of the regular season. Though Luxury was forced to retire in the Match Fixing Scandal, severely weakening KT's Zerg line, they were still able to eke out some wins with Hoejja, 815, and FireFist serving as snipers in ZvP and ZvZ.

As of 8th August 2010, KT has become the new champion of 2009-2010 Shinhan Bank Proleague after defeating their longtime rival and defending champion SK Telecom T1 4-2 in the Proleague Grand Finals, with wins by Violet, Stats, Tempest and Flash over Canata, Bisu, s2 and Hyuk respectively.

KT is a South Korean telecommunications company. Originally, the team was named after KTF, a subsidiary of KT, that specializes in cellular phones.

The team is also sponsored by ZOWIE GEAR, a gaming gear company. Working with KT Rolster to produce gaming gear products such as mice, headsets, keyboards and mouse pads for e-sports.