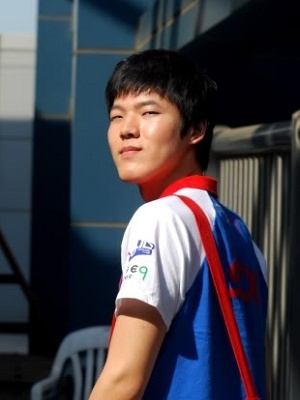 Kim "Kal" Ku Hyun is a StarCraft progamer from South Korea who played Protoss for Air Force ACE. He is also known as GooJila.

In April 2014, he retired from professional StarCraft II.[1] He currently plays in amateur leagues.

Kim Ku Hyun was drafted to STX SouL in 2006 and has been a regular on their Proleague lineup since 2007, and commonly played as the team’s ace. Kal didn’t really burst into fame though until 2008 when he reached the finals of the 2008 GOMTV MSL Season 4, which he lost to Jaedong 1-3. During the earlier stages of his career he was known for having an unusually strong PvZ (having around a 70% winning record in it for over two years). In 2009 his PvZ performance seriously declined, bringing his lifetime winrate to only 55% in the match-up, making it his weakest one. His other two match-ups, especially PvP has tremendously improved on the other hand, keeping him one of the strongest Protoss around, and one of the most relied-upon players of STX SouL.

He is nicknamed ‘The Red Shuttle’ due to his constant and daring Shuttle use in games. (The heavy use of a Shuttle during a game would commonly end with the Shuttle on low HP, thus showing up red in the HUD.) He is also known for his very creative and harass-oriented play-style. He is the currently the strongest and most accomplished Protoss player on his team. Kal is a member of the Six Dragons. His second place finish in the GOMTV MSL Season 4 and his Round of 4 finish in the 2008 Club Day Online MSL cemented his position in the group.

During the Avalon MSL, Kal was reunited with 3 of his fellow Dragons and fellow ClubDay Round of 4 opponents in an all Protoss Round of 32 group. Placed in a group with Free, Bisu and JangBi, Kal showed off his recently strengthened PvP and won his group 2–0, qualifying with Bisu. Kal went on to face Jaedong in the Round of 16 in a GOM MSL Season 4 finals rematch, where Jaedong ended up defeating Kal 2–0, knocking him out.

With the emergence of Calm as the ace on STX, Kal has been kept on the lineup as the team’s main Protoss player, most of the time destining YoonJoong to stay on the bench unless STX submitted two Protosses for the lineup of a certain match. He started the Proleague Season 09–10 strongly, finishing round 1 with a 5–4 record including wins over rival JangBi and Hite ace Leta. Kal’s strong play continued as he qualified for the NATE MSL. He advanced from his group with 2–0, and dismantled Saint 2–0 in the Ro16. He moved on to face his Terran team-mate Hwasin in the Round of 8, which, despite both having been progamers for a long time, was actually their first encounter in an official game. Kal managed to win that series with ease, 3-1, and advanced to face Jaedong in the Semi-Final, where The Tyrant destroyed him 3-0 in very convincing fashion (and proceeded to win the NATE MSL).

After his defeat in the NATE MSL, Kal quickly picked himself up and became the dominant ace player for his team in Proleague, going 12-8 in Winners League and 9-5 in Round 4 of Proleague (including 4-0 in ace matches which has helped bring his team to the top of the rankings). Simultaneously Kal qualified for the Korean Air OSL Ro16, his 1st time back in the Ro16 since the Batoo OSL. After going 2-0 in his group, he dropped his final game in his group to flash after being unsuccessful converting an early lead into a victory (thus allowing Flash to advance to the Ro8 with him). Meanwhile in the Hana Daetoo MSL Kal failed to make it out of his Ro32 group (which he was seeded in), losing to Great and Hiya. In the Ro8 of the Korean Air OSL, Kal defeated his opponent and long time rival ForGG 2-1, and moved on to the semifinals where he was favored to win against EffOrt. Despite the hype surrounding Kal, he lost 0-3 to EffOrt in a dominating fashion, first losing with a strategic 1-base build on Great Barrier Reef and then having his style completely countered on Fighting Spirit. In the 3rd set Kal got into an elimination race with Effort on Match Point. While at first it appeared that Kal was going to emerge ahead, poor army movement and keen observer-sniping gave Effort the advantage and the win, thus ending Kal's OSL run.

Throughout the rest of 2010 Kal had moderate success, with the highlight being reaching the Ro8 of the PDPop MSL and the Bacchus 2010 OSL simultaneously. However he lost both series (to Great and teammate Modesty respectively) by just a single game in January of 2011. At the end of 2010 Kal was given the KESPA award for best Protoss of 2010. Kal remained the star player of the team throughout the first half of the 2010-2011 Proleague season, but by April of 2011 Kal entered a long slump. Kal failed to re-qualify for the next OSL and was uncharacteristically knocked out in the Ro32 of the ABCmart MSL in PvT, which is generally his best match-up. Despite his poor results, Kal was consistently put on his team's lineup, racking up 19 proleague appearances between April and August 2011, but only managed to maintain a 29% winning ratio. STX still managed to make the playoffs despite Kal's slump, but lost to KT in the first round in a close match. After some time off Kal decided to apply for Airforce ACE for next season. He was accepted and is expected to play on their team sometime early 2012.

The left side of the table below shows Kal's overall record as of June 8, 2012, while the right side shows his statistics during the Era of the Six Dragons from September 1, 2008 to March 31, 2009:

Kal has met JangBi twice in an MSL Semi-Final, beating him 3–2 in the GomTV MSL Season 4 and losing to him 1-3 in the ClubDay MSL. Both lost to the eventual winner 1–3.

Their lifetime record is 11–7 in favor of the Samsung Protoss.

Kal and fOrGG created one of the most memorable and talked-about best-of-fives of 2008 in their Arena MSL Round of 8 match (after they have already clashed in a very entertaining game in the group stages of the same league). After his victory over Kal, fOrGG ended up taking the Arena MSL.

They have been paired up again in the Korean Air Starlegue 2010 Quarter-Final, where Kal knocked out fOrGG 2–1.

Kal is career 5–5 against fOrGG.

Kal and the Zerg Tyrant have met several times during their careers, the latest encounter being the Semi-Final of the NATE MSL, a best of 5 series that Jaedong took 3–0. Their most famous, or at least most prestigious clash was the Final of the GOMTV MSL Season 4, where Jaedong won 3–1. Jaedong also eliminated Kal from the Avalon MSL in the Ro16.

While Kal has always been considered exceptionally skilled in the PvZ match-up (despite his dismal statistics in the 08-09 season), he could never really prove himself against Jaedong. They have met numerous times in different leagues, and while Kal managed to take single games off Jaedong both in the Proleague and the individual leagues, so far the zerg has won all of their best-of-x encounters. Their lifetime record is 13–3 in heavy favor of Jaedong.

Even at the top of his form, Samsung KHAN Stork always had trouble beating Kal, already back when the latter was still known for his sub-par PvP. Kal has eliminated Stork 3–2 from the ClubDay MSL, and they have split their 6 games in Proleague evenly so far. Making Kal 7-5 vs Stork.