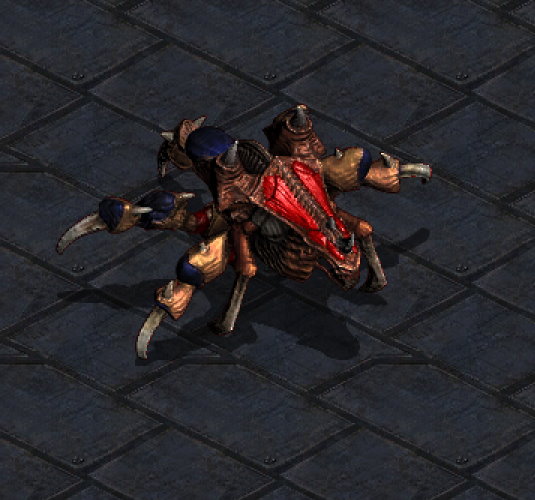 The Lurker is a unique unit added in the Brood War expansion. It attacks while burrowed, dealing splash damage in a line. The Lurker Aspect, which requires Lair tech, must be researched at the Hydralisk Den. As such, the Lurker does not need the appropriate upgrade to Burrow.

Lurkers attack with a series of spines that burst upwards from the ground and impale enemies in a line. The spines burst in a straight line from the Lurker toward its target and travel to the maximum attack range regardless of the target's original position. The attack is not instantaneous; it takes some time for the spines to reach the maximum range. Because of this, it is the only standard attack in StarCraft that units can dodge once the attack has been fired. Despite this, Lurkers do not lead their shots. Units traveling perpendicular to the Lurker are apt to take no damage at all; for this reason, they must be positioned strategically so that their spines always travel straight toward the enemy. They excel at holding ramps, bridges, and other choke points, where enemies must approach directly and cannot easily evade. This technique becomes all the more effective if the Lurkers are held. They can also fortify a Sunken Colony by burrowing directly in front of it; the Colony's range is seven and the Lurker's range is six, so they'll attack at the same time.

Despite what physics might suggest, Lurker spines travel up and down cliffs as normal. They even travel across the void of space on the platform tileset, given the distance is short enough.

Spines deal splash damage. Each spine does its own splash damage as it arrives, centered on the spine itself; ergo, the final spine's splash extends slightly past the Lurker's listed attack range. Uniquely, they only deal 100% damage; there are no 50% or 25% splash zones, and the splash is big enough to hit targets despite falling short; vis-à-vis, cliffs, doodads, and Dark Swarm offer no protection. Lurker splash is friendly; it deals no damage to its player's units, but will damage allied players' units in team games.

Despite their splash effect, Lurkers deal Normal damage. Therefore, a Lurker deals far more damage to Medium and Small units than its predecessor, the Hydralisk (33% and 100% more, respectively).

Lurkers almost never appear in ZvZ since ZvZ matches are usually low-economy Mutalisk and Zergling games. If a player does go for a Hydralisk build, Lurkers may find use, especially Hold Lurkers. Hydralisk builds depend on a mid-game timing attack, so if this attack does not end the match and the player techs to Lair, Lurkers may make their appearance if the enemy has a Zergling-heavy composition. Lurkers eviscerate Zerglings, particularly in groups. But since Zerglings close and surround their prey so quickly, many Lurkers must burrow together to head them off, which can be difficult against Zerg base pressure without Mutalisks, and the gas costs make Mutalisks and Lurkers mutually exclusive. However, if the enemy's Overlords can be cleared, they make strong defensive units.

Although long ZvZ matches rarely appear in the meta, Lurkers dominate in early-late-game ZvZ. Once Defilers come into play, they neutralize Mutalisks, which players tend to mass through the early- and mid-game. Only Ultralisks, Zerglings, and other Lurkers can damage Lurkers under a Dark Swarm, and massed Lurkers can take care of Zerglings rather easily. Beware, though, of the enemy's Defilers; Plague works just fine, and the Lurkers have to come out eventually …

Lurkers shine in ZvT, where they see use in the mid-game and well into the late-game defending expansions from infantry, and they often appear in builds' standard army compositions combined with other units, especially Zerglings. With good positioning and flanking maneuvers, Lurkers butcher Terran infantry with their brutal splash damage and superior range. Paired with Defilers, they can force a quick retreat—Firebats do poorly against them under Dark Swarm, and Marines can't hit them at all.

Nydus Canals allow Lurkers to quickly reinforce a vulnerable expansion, but Lurkers only do well in groups if they have a strong positional advantage (e.g. atop a ramp). Despite their high damage, focused fire from Marines supported by Medics bring lone Lurkers down quickly enough.

Lurkers see offensive use until Ultralisks are hatched.

Terran infantry armies tend to exploit Lurkers' immobility; they can retreat upon seeing Lurkers burrow. Then, the Zerg player must either pull his Zerglings back, or unburrow the Lurkers to continue the chase.

Zerg players often respond to the 2-port Wraith build with Lurkers; it runs off of one base, which limits its use of Scanner Sweep. Scans typically spy on Zerg tech and find Zerg expansions; they rarely check for Hold Lurkers. If the Zerg player deploys Lurkers soon enough, they can place Hold Lurkers at the Terran natural, which decimates the Terran army if they aren't careful.

With their high health and gratuitous armor, a Lurker egg blocking a ramp takes inordinate time for low-damage units like Marines to kill.

Lurkers counter groups of Zealots. In some situations, they serve against Dragoons. Lurkers tend to contain Protoss in spread-out fields since Lurkers tend to clump when moved as a group. Since they cannot flee once burrowed, a single Psi Storm can obliterate many incautious Lurkers, a tactic against which they have no defense due to the Storm's superior range. Overlords and Scourge often pair with Lurkers to snipe Observers, denying detection.

Certain ZvP strategies depend on turtling across several bases with a Sunken Colony/Spore Colony/Lurker defense. Narrow choke points amplify Lurker damage, and a Spore Colony placed slightly ahead of the Lurkers can repel observers, making the position difficult to break.

Lurkers remain staple units until the late game, when Ultralisks replace them.