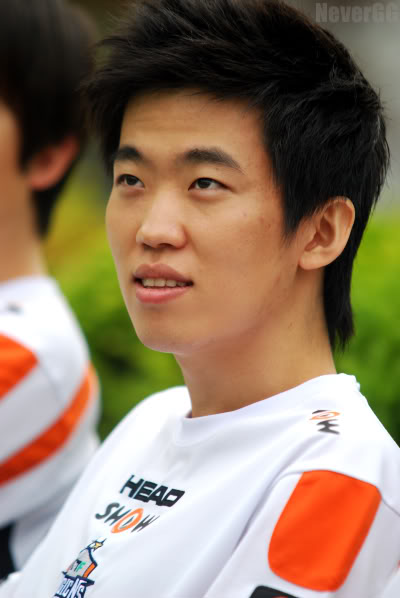 Park Chan Soo first broke out into the scene in 2005 with a win against DoGGi in the SKY Proleague 2005. Going 4–0 in his first four broadcasted games (all in Proleague), he secured his place as a Proleague starter on team KOR (later to become OGN Sparkyz). In the early years of his career, Luxury was overshadowed by his twin brother YellOw[ArnC], who until 2008 was considered the “better twin” as he had much more individual league success until then. In 2008, Luxury burst onto the scene by making 2 Starleague Semi-Final in a row (first in the Bacchus Starleague where he lost to Stork and then again in the EVER Starleague 2008 where he lost to BeSt). In a short amount of time Luxury became known as the undisputed “second best Zerg in the world,” always performing much better than every other Zerg except for Jaedong (who was considered the best). Luxury became most known for having excellent ZvT after defeating tournament favorite Flash in the Ro8 of the EVER Starleague 2008, although statistically ZvZ is his best match-up, and he has the third highest Elo rating peak in the match-up of all time (only behind Jaedong and YellOw).

In September 2008 Park Chan Soo transferred from OGN Sparkyz to the KTF MagicNs (now known as KT Rolster). Although initially Luxury had good results on the new team, he quickly started to perform worse, most notably in Proleague. Luxury dropped out of the Incruit OSL in the Ro16 and failed to qualify for the Ro32 of the CludDay MSL during that time. In early 2009 Luxury managed to qualify for the Ro16 of the Batoo OSL and reach the Ro32 of the Lost Saga MSL, although he continued to show poor results in Proleague. Although Luxury ended up losing in the Ro8 of the Batoo OSL to FanTaSy, he performed extremely well in the Lost Saga MSL, defeating Hwasin, Leta, and ZerO to reach his first ever finals where he faced off against JangBi. Luxury triumphed over JangBi in a rather 1-sided series with the results being 3-1.

After the Lost Saga MSL, Luxury entered a severe slump. He continued to perform poorly in Proleague, and failed to make it out of his Ro32 group in the Avalon MSL, and failing to qualify for the Ro16 of the Bacchus 2009 OSL. In the WCG 2009 Korea selection Luxury showed that he may be back to his old form when he defeated Calm and his brother YellOw[ArnC] to reach the semifinals of the tournament (where he lost to eventual champion Bisu and then lost to Jaedong in the 3rd place match), but it was unclear as whether this was a sign of true improvement or not.

Luxury qualified for the 2009 EVER OSL but was knocked out in the round of 36 after losing 1-2 to Guemchi. Despite this, Luxury had a very strong showing in Round 1 of the 09-10 Proleague, finishing with results of 7 wins and 2 losses, and strongly contributed to KT Rolster's end of round stats of 10 wins and 1 loss.