The MBCGame StarCraft League (MSL for short) was formed in 2003 and replaced the KPGA Tour. The MSL was broadcast by MBCGame, which was a cable television network in Korea dedicated to video games. Alongside the Starleague (OSL), the MSL was considered to be one of the two major tournaments for professional StarCraft players. In terms of prestige, the MSL generally ranked behind the OSL, but they are considered the same skill-wise.

The format of the MSL has changed a few times since its beginning. From the Stout MSL until the GOMTV MSL Season 1 there were 16 players after the Survivor Tournament. This was changed at the start of GOMTV Season 2 to 32 players. The current format is as follows:

The Group Selection or Steal Draft was a somewhat long and complicated process that was not helped at all by the large number of players qualified in each MSL season.

The first eight seeds are placed into groups A through H, with the first seed in Group A and the eighth seed in Group H. Seeds nine through 16 are determined by previous MSL performances. Seeds nine through 16 are then placed into the other pair in groups A through H, but in reverse order. Seeds eight and nine would be in the same group, then seven and 10, six and 11 and so on up until the first and sixteenth seeds.

Once players are placed into groups, the remaining players are also ranked based upon previous MSL appearance and performances. Starting with the 17th, and ending with the 32nd, each player takes his own name and places it in an open spot next to the player he wishes to play against.

The second seed is able to pick two moves on the same turn from the following: (1) Exchange a player in their group with another player, (2) Exchange any two other players with each other, or (3) Pass the turn and exchange no one. The first seed earns an extra decision. He is able to switch any player with another player and may do so up to three times or until they wish to pass, but cannot use all three decisions in the same turn. At the latest, the first seed must choose after the third seed, if he wants to use all three turns. 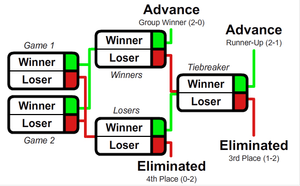 Schematic of the Survivor format

After the group selection process is complete, all players are grouped up into eight groups of four. Each group must go through a double-elimination bracket to determine which players will advance and which players are eliminated.
This works as follows:

The players who finished first out of their group's last round will be paired against a player that finished in second. Each pair of players will play a best-of-three match to determine not only who will advance to the next round, but who will earn seeds for the following MSL.

In previous MSLs, the eight renaming players would be paired against each other based on the groups they were in in the round of 16. From the Avalon MSL on, the eight players that advance from the round of 16 were paired against each other based on their KeSPA Rankings: the highest ranked player faced off against the eighth rank, the second highest faced the seventh, etc.

Matches in the round of 8 are best-of-five are again separated into two parts:

Again, the semifinals and finals are decided by best-of-five matches. 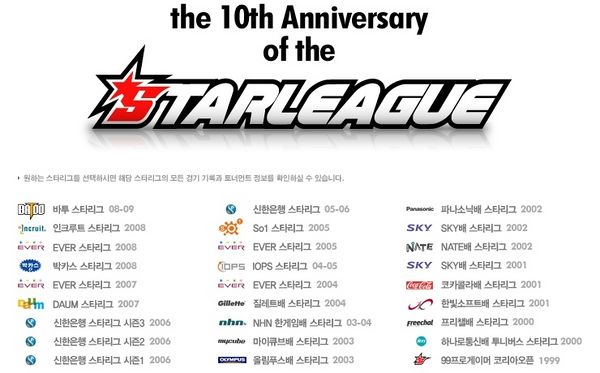 Celebrating the First Ten Years of Starleague (OSL and MSL)