Sometimes you want a group of units to stay in formation, such as when blanketing the screen with Psionic Storms or when laying fields of Spider Mines. In other occasions, it may be optimal for units to clump as closely as possible -- for example, Mutalisk harassment.

The following will explain how to keep your units and cast spells in formation.

The fixed magic box is the maximum distance your units can be from each other and still stay in formation when you issue an order. The size of this box is hardcoded into StarCraft and varies for air and ground units.

Use the picture for reference. 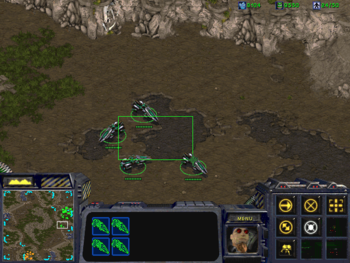 Note that the box does not necessarily have to be a square. Once again not all units have to entirely fall within the box, just enough so the units can be selected.