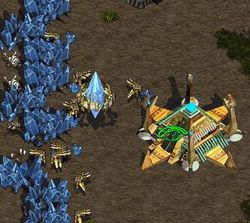 A Manner Pylon is a Pylon placed inside your opponent's mineral line, obstructing the mining process and possibly trapping workers between the mineral patch and the building. Most frequently used in PvP, but also sometimes in PvT. The name derives from being a quite unfriendly and bad-mannered act, therefore Manner Pylon is a sarcastic expression.

The overall effectiveness of the Manner Pylon is debatable. It might give you a psychological edge and it forces your opponent's first fighting unit to stay back in his base and destroy the building. However, it costs you 100 Minerals (25 after cancel) and slows down your Build Order.

It should be noted that while a Pylon can be canceled to save minerals, this is generally not done, as canceling it reduces the window so much as to put your build behind without severely affecting your opponent. If enough Probes are caught in the prison, this can give a quite substantial economic advantage.

Another effect is Probes moving behind the mineral line in order to mine the patches now blocked by the Pylon. This helps harassing the Workers with Zealot(s), since moving into the mineral line might allow the defending player to trap the Zealot.

It is usually possible to get every probe out of the Manner Pylon. If more than one probe is stacked in the prison you can force them out pressing "stop" and "right click" repeatedly. To get the last probe out, simply move the trapped probe to the corner of the prison so that it overlaps with a mining probe outside and then press "stop" and "right click" outside several times to get the probe out. This is demonstrated in the following videos: