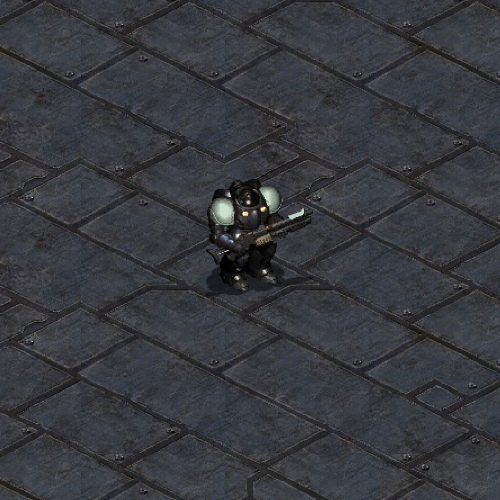 The Marine is the base Terran combat unit. It deals 6 normal damage to both air and ground targets. When upgraded with Stim Packs, it can sacrifice 10 hit points in order to double its rate of fire and increase move speed, and the U-238 Shells upgrade increases its range. Marines work very well with medics. They can be loaded into a Bunker, protecting them and further increasing their range by one, for a total of six, together with the range upgrade.

These are researched at the Academy.

Marines are considered a staple of TvZ. The Marine Medic combination, often abbreviated as M&M, sees extensive play in many TvZ games. The M&M force is cost efficient, and versatile in the match-up. Marines have seen play in many different variations of TvZ, ranging from SK Terran to biomech. A Terran's skill in TvZ is often reflected in his marine control against Mutalisks, Lurkers, Zerglings, and Ultralisks. Despite Marines' low health, a skilled Terran can win seemingly impossible odds against Zergling Lurker forces. It is important to focus fire your Marines against Mutalisks and Lurkers to reduce the opposing force as soon as possible.

A Terran may choose to bunker rush with his marines, perform a sparks Terran sunken breaker, or simply react to the Zerg.

However, it should be noted that Fantasy's Fantasy Build and variants thereof have been gaining popularity extremely quickly and has become a viable alternative. The mech build does not involve a Marine heavy army.

Marines play a small role in TvT. Aside from early cheese builds, generally, only 3-4 marines are built for defense against an early Vulture push. Marines do not see extensive play in standard games due to the dominance of Vultures, Siege Tanks, and Goliaths.

Marines play a small role in TvP. Depending on the build that the Terran decides to pursue, anywhere from 0 to 5-6 Marines can be built. Generally, Terrans build 3-5 marines to defend against Dragoons and shoot down scouting Probes. If the Terran decides to do a rush he can choose to build more. Later on, marines can chase off Shuttles.

Marines are not seen in normal TvP past early game due to their vulnerability to Protoss area-of-effect damage. They are easily dispatched by Reavers and the Psionic Storm of High Templar. However, there are instances where a Terran opts for a Marine, Medic, Siege Tank force to surprise and overwhelm the Protoss.

Marines have the tendency to lose against Dragoons. Dragoons have more hit points, deal higher attack damages, and have longer range than Marines. Protoss Dragoons, with their superior range, may be able to attack and retreat without being hit by Terran Marines. Dragoons can also regenerate their shields while doing this.

However, Marines can be part of TvP cheese. If the Protoss opts for a 14 Nexus (vs. Terran) build, Terrans have the option of performing a bunker rush to destroy the expansion. If the Protoss completes a gas steal, a Terran may forgo his mech build, and opt for a Marine rush to surprise the Protoss.

Marines with the +1 armor upgrade can take an extra hit (now 2 hits instead of one) from Dark Templar. Also, +1 armor allows an extra hit for Marines trying to break Photon Cannons.