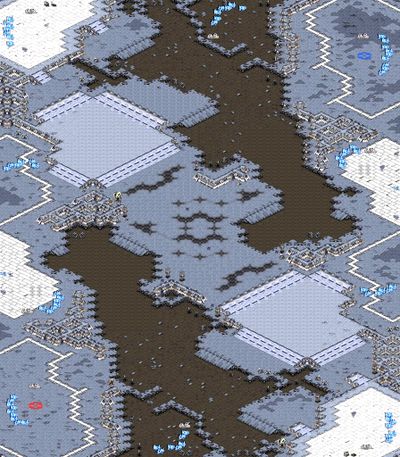 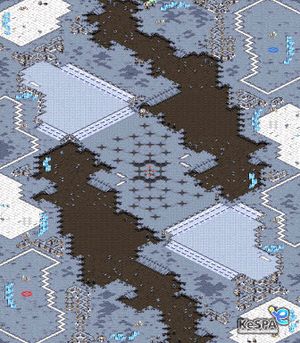 Matchpoint in its pre-Map test form as version 0.91

Match Point is the weirdest map for Protoss – they dominate Zerg and get stomped by Terran. In TvP, the way the expansions pan out is Terran heaven. Expanding used to feel pretty unsecure beyond your natural, with highgrounds and backway passages to all of them, but with the newest versions the highground platform can defend your third pretty easily (while the other route to your nat is a small ramp – the Mineral only is gone now). Though the middle is unbuildable, and pushing distances are pretty far, Terran can take 4 gas mains along the way. Rush distances, however, are really short. Both Really and Leta acknowledged this and set up strong early rushes across the small middle. Recalls and drops appear to be pretty strong but we haven’t seen them yet in this MU.

Now to the good news: PvZ and TvZ are wonderfully dynamic. The general direction of pushing is a sort of chicane – going over the big platforms – but like an irrigration system there are a bunch of little routes that units can seep through. However, Protoss gets their natural expansion up a ramp, making a FE ever so easy and Storm is very strong on the many ramps of this map. Zerg probably has to figure out how to be more versatile in army movement to keep up with Protoss on this map – Orion and Modesty show hope is not yet lost. Drops prove pretty strong but Orion fails to capitalize on his advantage.

Hogil vs Major shows how Mutas over that cliffed natural are just too friggin strong and, even though Major does a commendable job holding on, he’s on his back foot throughout the entire game. We do get to see how armies can be moved around. Overall it’s a pretty fun looking map that should give rise to very entertaining games.[1]