This article refers to the map made in 2008. For the map with the same name made by Blizzard, see Medusa (Blizzard Map) 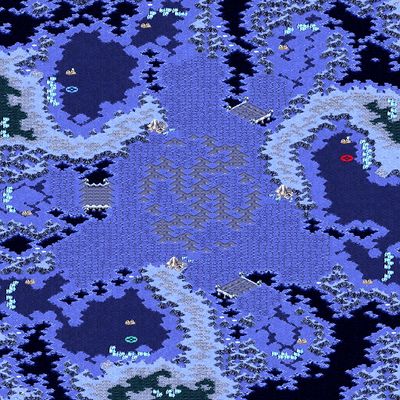 Medusa debuted during the fall 2008 season, and was put to immediate use in the 2008 Incruit OSL, the 2008 Club Day Online MSL, the 2008 Shinhan Bank Proleague, and the 2008/09 GOMTV Averatec-Intel Classic Season 2. The map offers many possibilities for Dropship play, and in this regard is positionally imbalanced. More importantly, each main has a back door blocked by stacked destructible neutral building. This feature is an interesting twist and has led to some very creative plays on Medusa.

The original map was very difficult for Terran against Protoss; though the statistics do not appear terribly imbalanced at first glance (39-18 in favor of Protoss), they become much more damning once you realize that Flash went 7-1 against Protoss on the map, without which the statistics reduce to a dismal 38-11.

Some call this map "Taekdusa", because of Bisu's impressive performance[1] on it. He lost both games to Flash on this map though thus Flash having a better statistic.[2]