The term metagame literally means 'beyond the game' and refers to any planning, preparation, or maneuvering that a player does outside of actual gameplay to gain an advantage. The metagame has three major branches, which contain some overlap:

This technique involves preparation based on assumptions made from observing the current state of the game. Although tracking the development of a game as complex as StarCraft is difficult, it is possible to understand the general development of StarCraft gameplay and prepare and adapt your game accordingly. An example of this is how while Terran players always opened 2 Barracks in 2005, modern Zerg players now often deal with Vultures, Wraith and Valkyries.

The following builds are examples of a great strategic shift that forever changed the match-up and forced the opposing race to devise counter strategies or lose.

The most frequent metagame shifts are between builds that try to counter each other without revolutionizing the match-up itself. While big impact strategies like the above happen once every few years, these smaller shifts usually happen at least a few times a year. It is these strategies that make up the regular and everchanging metagame because of their frequency. However, big shifts have also been historically slow to become popular and thus it was often only the original creator and a select few players that extensively used that strategy until it gradually caught on. In some cases, like with sAviOr's 3 Hatchery Muta, it took over a year and a half to become popular.

On the other hand many smaller metagame shifts catch on and become popular very quickly, thus forcing the other race to devote all their efforts to figuring out counters. These don't radically change how the match-up is played but just give one race a temporary strategical advantage.

One particular example of smaller scale metagame shifts is the PvZ record on Destination. For a time Protoss enjoyed a sizable win percentage, but then Zerg suddenly figured out a new build that more than adequately countered the Protoss standard and consequently won 13 games in a row. Then once Protoss figured out a counter to that build and won 11 out of the next 15, and so on. While the overall record eventually solidifed at an even 50%, PvZ history on that map was dominated by different streaks built from strategical advantages and disadvantages.

An excellent example of metagame development in action (again in PvZ) is Return of the King. When the map was first introduced in the Incruit OSL, Zergs enjoyed a large advantage, going 5-0. However, in the subsequent Batoo OSL, the trend completely reversed itself. Of 10 games played during Batoo, Protoss won 9 of them.

These strategical shifts, while best illustrated by Destination, were part of a long battle from 2007 into 2009 where each race constantly tried to one-up the other strategically.

At any given point of time one of these builds would have been popular for each race and that state would be known as the current metagame. The majority of players were expected to do the popular build for their race, although oftentimes someone would attempt to counter the current metagame by doing a different build, whether it be an old one or a new idea.

Build preparation, when done for a specific opponent or map, is another form of metagaming. In analysing an opponent's past gameplay strategies, a player may be able to prepare strategies that will allow him or her to later out maneuver and outplay his or her counterpart. For example, if a certain player is known to have an affinity for using a certain strategy, or is known to strongly favour a certain style of play, his or her opponent may sometimes choose to execute a build that will completely counter it. This style of play too is often considered to be psychological in nature as well, especially since the preparation for the game clearly takes into account an opponent's tactical strengths and weaknesses. 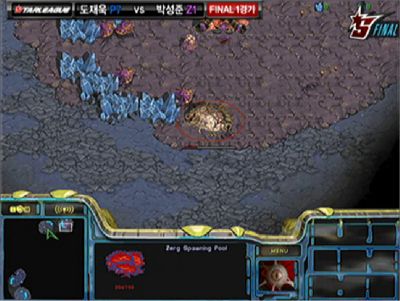 All in builds like the Zerg 5pool are used to unnerve opponents and thereby gain a mental advantage.
Strategy Information
Matchups:
All
Type:
Concept

This refers to the psychological struggle which occurs between players at the highest level, a tussle that takes place parallel to the tactical, in-game battle itself. A very fluid idea, this term encompasses decisions made by players that are not taken solely for in-game tactical or strategic reasons but rather to alter the mental status of his or her opponent.

It is most clearly seen in best of series games between players who know each other well, since in such a situation, the players' past records and games no doubt affect them heavily as they prepare for the said series, and it is at this level of play that carefully prepared builds are often most effective.

Psychological warfare can also be utilised in the course of a game. A player could choose, for example, to show an opponent's scout fake technology - buildings or units he or she does not plan on using, and then use another line of technology entirely, or mass a completely different type of unit. If his or her opponent takes the bait and prepares for the non-existent build, the player could end up quite far ahead tactically.