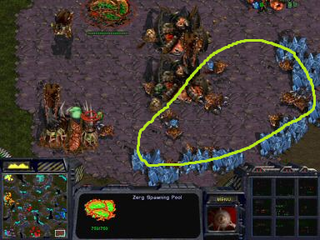 Mineral Line refers to the space between a group of mineral patches and a gathering facility (e.g. a Command Center) in which Worker units (e.g. SCVs) move back and forth, gathering and returning minerals; sometimes it may refer to the workers themselves as a whole. Mineral Line Saturation refers to how many workers there are in the mineral line in comparison to how many mineral patches there are. Generally a ratio of about 2.5 workers per mineral patch is ideal, but sometimes more or fewer workers are used. The mineral line is a very important but very fragile part of a player's base because it dictates the player's economy. Thus, mineral lines are often the first thing to be assaulted during an attack, before or after dealing with defending forces, and they are often the target of Harassment.