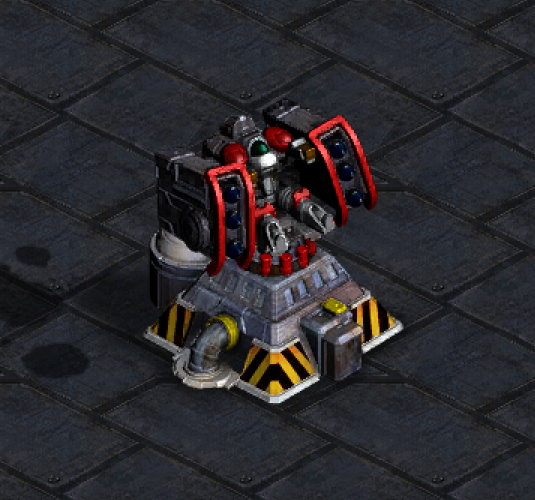 The Missile Turret (or Turret for short) is a Terran defensive building, which once constructed will attack flying units and buildings. It cannot be lifted off. It is also one of the modes of detection for Terran as it reveals cloaked units (including ground units) within its range of attack.

A Turret deals 20 explosive-type damage with a Cooldown of 0.63. The table below tells the minimum number shots a Turret must fire to kill oncoming units. Because the Turret must undergo a turning animation before firing, these numbers may differ from empirical values.

2 When ordered to unload directly next to the Turret, a Speed-upgraded Overlord can unload approximately six units before dying.

3 Of course, the Turret will be able to shoot at the Interceptors.

4 When ordered to unload directly next to the Turret, a Dropship can unload approximately five units before dying.

5 ~ to indicate minimum number of hits. As these units regenerate, they may require one more hit to kill.

Its low cost, high HP and considerable damage make the Turret a staple of all Terran matchups.

Turrets are generally needed to hold off Mutalisk harass. While the explosive damage the Turret deals isn't very effective against the small Mutalisks, they stall the onslaught long enough for Marines or other anti-air units to arrive. Turrets can be placed in positions where Marines can flank the Mutalisks and force them to fly over the Turrets to seek safety.

Sometimes, Turrets are built to fend off drops. They also can be used to stall Guardians. The latter will be prevented from simply flying into the Terran main base, but since Guardians have greater range, Turrets cannot be solely relied upon to defend against them.