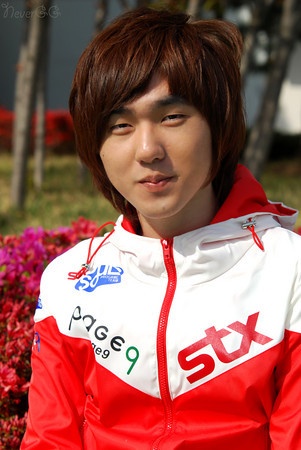 Kim "Modesty" Hyun Woo was a StarCraft progamer from South Korea who played Zerg for STX SouL. He usually took the role of a ZvZ sniper. In December 2012, he retired from professional StarCraft II[1]. Most recently, he streamed Brood War on Afreeca[2].

In April 2015, Modesty enlisted in the military to fulfill conscription[3].

Modesty was a rookie Zerg on STX SouL.[4] He became a semi-regular in their lineup in the 4th round of the SPL 08-09 season. He has played the Zerg vs Zerg match-up exclusively in Proleague. He has had some moderate success in the GSL season 3, reaching the Ro32 before losing to BaBy in the 3rd set.

Modesty played mostly ZvZ having only played one non-ZvZ game in his 13 games in the 2008–09 Proleague season. He mostly played on maps that are known for Zerg vs. Zerg (such as Battle Royal, God's Garden, and Raid Assault II).

Modesty has participated in several tournaments. He played in the 9th SonicTV Starleague where he managed to finish first in his Round of 32 group. In the Round of 16, he finished last in a group containing hero, Movie and Sea. In 41 Starleague Season 1, Modesty went on a dominant run taking down Larva, Mong, Sky and Midas in the group stages. In the elimination stage, he defeated Mong and Midas again then 4-0'd hero in the finals to win first place dropping only a single game along the way. In LoveTV Starleague Season 2, he managed to make it to the finals again beating players such as Hiya, Mong and sSak but took only second place after getting 4-1'd by Killer.

In 2014 Gabangpop 1st Sonic Proleague, Modesty played under the ex-KT tag. He was an invaluable member as he helped ex-KT secure first place. He finished with a 16-7 record with wins over notable players such as free, PianO and sSak. He would finish as the top ranked player in Proleague after 8 weeks of play. As it stands, Modesty is among the best Zergs in the post-KeSPA era on TLPD when it comes to ZvT, netting wins over formidable Terran players with his current ZvT record sitting at 72%.