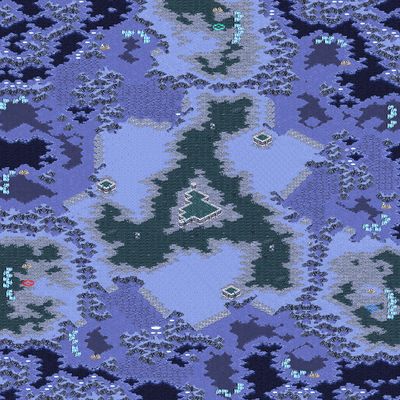 This map is one of the maps to be used in the 2009-2010 Proleague season after going through extensive map testing prior to the 09-10 season. It was given an update to Neo Moon Glaive in the second round of the 09-10 season.

Moon Glaive has some interesting features. High ground and positioning seem to be themes of these maps so far. Moon Glaive tried adding an extra dimension to it with the three "watch towers", but the ramps were removed in later version leaving it doubtful whether they’ll ever be manned by Tanks or Lurkers - unlike on Othello they’re not overlooking expansions. The other idea being explored here is shared with Asgard: the multiple entrance feature to the natural expansion. Typically, as we all know, natural expansions are easy to take and hold and most maps encourage them, shifting the game in more macro-oriented directions. No longer. This feature hurts versus the mobile armies and the map is already nicknamed Tears of the Protoss II, as Forge FE is such a critical part of the way the game is played.

Flanking seems very doable on this map, but defending the funnel lowgrounds should be easy enough and the highground middle is actually pretty small. We see this affect the TvP match-up when Barracks demonstrated Terran’s ability to set up mid-games push across the small, buildable highground, which proved very strong indeed. Mines and Tanks are very strong on the low ground areas, leaving Protoss unable to fend off harrass or to put on pressure as well as they’d like.

TvZ is really Terran favoured statistically and all the 4 showgames featured 2 Hatch aggression, getting Zerg 2 wins. A notable game might be Haran vs Last. Because of the clock-wise positioning Zerg takes the third main for a third, slowing down his mining and tech. When Muta harrass is fended off sufficiently (a single set of turrets can cover both production facilities and natural mineral line) the Terran push can reach the highground over the Zerg natural fairly easily. Lurker numbers are way too small to break the contain and flanking is impossible in the narrow passages (Medic block revival go!). Even though the middle should have some flanking potential, a Terran push arriving outside your natural is devastating.