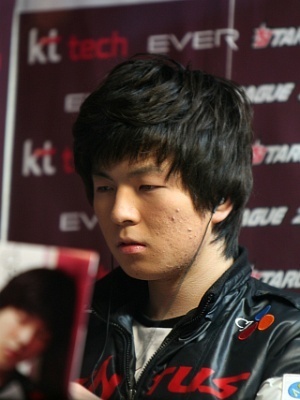 Jin "Movie" Young Hwa is a StarCraft progamer from South Korea who played Protoss for Team 8. He currently plays in amateur leagues.

First appearing with a mediocre record in minor league, Movie made his Proleague debut in the Shinhan08 Proleague. He became a semi-regular appearance on the CJ Entus lineup, usually competing with teammate Much for a spot on the lineup. Movie was removed from CJ Entus' roster during the June/July 2009 lineup changes in favour of Snow but was bought back shortly after.

In Round 1 of the 09-10 Proleague season, Movie was used almost exclusively for the Protoss spot, due to Much's departure for Air Force ACE and finished the round with a respectable 4-5 record. Movie had success in individual leagues by qualifying for both the 2009 NATE MSL and the 2009 EVER OSL. In the MSL he was knocked out in the round of 32 after going 1-2 in his group with losses to frequent opponents by.hero and Canata. In the OSL round of 36, Movie knocked out by.hero in the seeded game. Head to head, Movie has a 4-2 record over by.hero in what could have developed into a strong rivalry.

Movie qualified for the round of 8 in the OSL going 2-1 with victories over Pusan and Go.go. Movie also played Jaedong in this group, but lost. Movie won the opening game against ZerO, giving him a 1-0 lead in the split day format. In the second game on Eye of the Storm, Movie's strong PvZ dismantled a faltering Zero and gave Movie the 2-0 victory. This set him up for a Semi-Final match against Shine, making him one of only two possible Royal Roaders left in the OSL, alongside Calm. Before their game in the round of 4, Movie had played Shine twice, in two best of one games. Shine had won both of those games and held a 2-0 record against Movie. Nevertheless, Movie overcame this obstacle and defeated Shine 3-1 in the Semi-Finals, which made him progress to the OSL Finals where he would meet Flash.

At the OSL finals, Flash defeated Movie with a score of 3-1. The first set was on Heartbreak Ridge and it was a 40-minute-long game which many think is the best game in the series.

On May 7th, 2012, KeSPA informed the public via their website that Movie had transferred from CJ Entus to Team 8 per his request, after a poor performance in the 2011-2012 Proleague Season 1[1]

Eventually Movie switched to Starcraft 2 when KeSPA made the transition. However, he did not play SC2 for long and retired. Afterwards he started streaming Brood War and playing in tournaments. He played in four Sonic Starleaguess with his best result being third place in 9th SonicTV Starleague. He also managed to win the 12th and 13th edition of the SOSPA Ranking Tournament.

In 2016 Movie managed to qualify for Afreeca Starleague Season 2 after defeating PianO and Shine[kaL] in the Seoul Qualifier. His ASL 2 group included Flash, Soulkey and Terror. While he lost his first game against Soulkey, he managed to advance in second place after defeating Terror in the Losers Match and taking revenge against Soulkey in the deciding match. In Ro16 his group consisted of Sea, Rain and Flash.