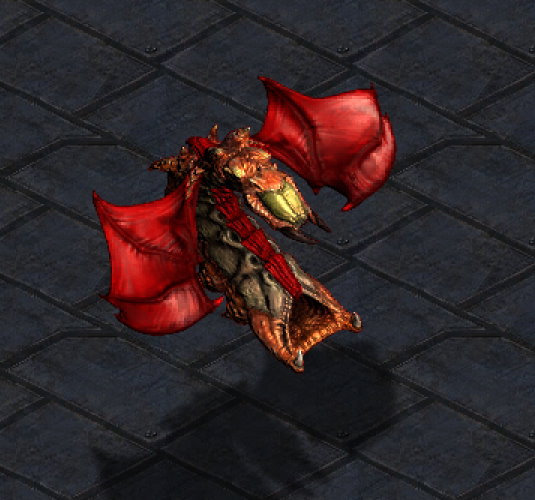 The Mutalisk is a fast moving air unit that requires a Spire and thus Lair-tech to be spawned. Its attack deals the same damage against ground units making it a potent harasser and its health and mobility makes it a match for other single-target air-to-air units and low masses of most ground-to-air units with Zerg's typical economy.

Due to the Mutalisk's high mobility, Mutalisks are often used in the early game to attain map control. Their high micro-ability and speed make the Mutalisk a good harassment tool for the Zerg. The usefulness of Mutalisks usually goes down as the game progresses, since Mutalisks are not cost-efficient for attack power, bases become more easily defended, and they do not benefit from many late-game tech additions both on the controlling side and the enemy. They may still be useful when the opponent loses anti-air capabilities or in order to snipe key units with their speed (i.e. High Templar or damaged Science Vessels), often even justifying their cost.

The Mutalisk's projectile, called the Glaive Wurm, hits the target and then two subsequent targets (each for a third of the previous hit's damage) with upgrades improving the first attack and being divided from there. This makes armor against Mutalisk powerful for reducing damage since it effectively cancels the other bounces.

Due to the Mutalisk's low range and attack style, it has become very standard to stack Mutalisks using a method of selecting one far-away unit, such as an Overlord, in the same selection group as the Mutalisks. This causes the units to stack to the same location (as long as the far-away unit stays outside of the Magic Box of the group). When microed correctly, stacking allows them all to shoot the same target at the same time and keep individual units from being focused down. This allows for effective harassment as if of single units such as Marines, High Templar, and workers. With the Greater Spire, the Zerg player can morph Mutalisks into either Guardians or Devourers.

Here is a helpful guide on Mutalisk Harassment Techniques.

Mutalisk are the primary choice of tech in all ZvZ matches. In mid-game games are decided on who has air superiority since they are so effective. Paired along with Scourge, also a Spire unit, Mutalisk and counter-Mutalisk tend to be the crucial deciding factor. This power comes about because Mutalisk are the most powerful unit in a matchup between about any other Zerg unit. The only other choices for anti-air are Hydralisk which deal explosive damage that do not work well against small Mutalisk and Scourge. (Technically speaking Hydralisk can still be cost-effective when they do find a fair engagement but lack mobility.) The high degree of power difference between well-microed Mutalisk tend to win the game as well. In case of a stalemate they fall out as typical once spell-power is acquired but this is rare.

With great Micromanagement, it is actually possible to effectively dodge and kill Scourges with Mutalisks.

Mutalisks are extremely common versus Terran in the mid-game. Against a standard bionic build, the goal of the Zerg player is to delay the Terran's push for as long as possible, using stacked Mutalisks to kill stray units or buildings, and to exploit any gaps in their opponent's defense.

Against mechanical Terran builds, Mutalisks are commonly used en masse and usually combined with Hydralisks or Zerglings. This is powerful because the mechanical units in the early game do not attack air and the Terran player must produce anti-air from Marines, Goliaths, or a Starport. The mobility of the Mutalisks allows the Zerg player to prevent the Terran from taking too many expansions, and to harass smaller groups of units. If you see your opponent has Goliaths, it is better to get +1 armor than +1 attack. This is because Goliaths do 2 attacks.

In the late game, Mutalisks are often used to destroy Science Vessels that have low hit points due to previous use of Plague.

In the rare occasions where Wraiths are used they have a bit of a micro advantage and engagement advantage due to their similar speed and greater range, but even though Mutalisk have a relatively weak anti-air attack Mutalisk still have a better cost efficiency when they do engage.

In air-heavy battles as are common in extreme late-game for Terran Mutalisk largely lose their effectiveness and instead spells like Defiler Plague are more common to deal with air. Some may be morphed to Devourers for a bit of an advantage however.

Against Protoss, Mutalisks are primarily used to snipe High Templars in order to severely weaken the Protoss army. In rare cases they are used to snipe Observers effectively. They can pick off Probes and destroy Photon Cannons very quickly. A group of Mutalisks can easily overpower one or two Corsairs, but as the numbers of Corsairs increase, the effectiveness of Mutalisks decreases dramatically.