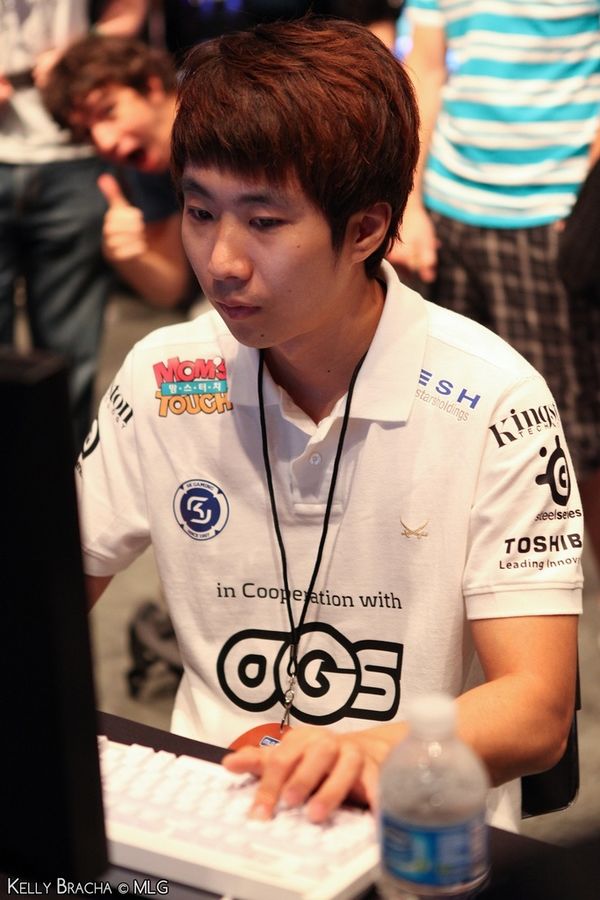 Lee "NaDa" Yoon Yeol is a StarCraft progamer from South Korea who played Terran for WeMade FOX. He was nicknamed the "Genius Terran" for his excellent macro-management, mechanics, and innovative strategies.

NaDa currently plays Brood War on Afreeca after being discharged from the military in April 2015.

Lee Yoon Yeol is a serious contender for the greatest StarCraft progamer of all time, and for good reason. As the most successful player he has achieved a championship almost every year since he started including 3 consecutive MSLs followed by 3 OSLs to win the Golden Mouse. Almost universally feared in his prime, it says something that the opponent with the greatest success against him is iloveoov, in many ways his successor. He maintained a 61% win rate over a span of 1100 games: more than anyone else, and is one of a handful of players with this win percentage or higher. NaDa also carried his team in Proleague having twice won the KeSPA Award for most Proleague victories out of all the players.

First bursting onto the scene in 2002 as a member of Ideal Space (an early powerhouse team which also had BoxeR and YellOw) NaDa spectacularly won the second, third, and fourth KPGA Tours (the equivalent and precursor to today’s MSL) earning himself nicknames like Prodigy and Genius. In the KPGA 2nd Tour he triumphed over YellOw (who previously had struggled conquering Boxer in finals). In the KPGA 3rd Tour he convincingly tore apart Reach 3-0 who had just defeated Boxer 3-1 in the OSL. Then in 2003 as he won the fourth KPGA Tour he also traveled the Royal Road to dominate the Panasonic OSL, despite the collapse of Ideal Space which caused NaDa and Yellow to head over to KTF, then to the new team Toona S.G. with Yellow going back again to KTF. With a jaw-dropping record of 11-4 (including 3-0 against ChoJJa in the finals whom he also routed in KPGA 4th tour) NaDa became the first person to win the two major starleagues simultaneously, a feat not matched until Flash 7 years later. Two months later NaDa would also make the finals for the now discontinued GhemTV Starleague and triumph over H.O.T-Forever 3-0. If that were not enough, that year he also crushed the Terran Emperor Boxer 3-1 (after going an outstanding 13-0 in the previous matches) in the first KT-KTF Premier League, the league with the greatest payout at the time. In the 3 MSLs following his last championship he still managed to place 2nd (to Nal_rA), 3rd (to iloveoov), and 2nd again (to iloveoov). His exploits in 2003 earned him the title of Grandslammer for winning three different Starleagues at the same time and the KT-KTF Premier League as well.

It was at that time it was said among the progaming circuit that “if you let NaDa secure his natural then he has won.” His playstyle then was noted by first taking a relatively early expansion and then pummeling the enemy into submission through his unprecedented combination of overwhelming macro and exceptional micro. Consistently having an average 400 APM, NaDa was largely responsible for the first shift oriented towards perfect mechanics. He admitted in interviews that he did not focus on map or player-specific builds but rather worked out of straight-up builds executed to perfection. This is why some termed him as a Machine. NaDa's SK Terran displayed impeccable Marine-Medic and Vessel cloud control, and did not face any serious threats until the advent of sAviOr. NaDa also had a distinctive style in the Terran vs. Protoss match-up called Tornado Terran. It mainly consisted of harassing his opponent with Vultures while macroing, and finally emerging with a large number of Siege Tanks that would destroy the opponent's expansions and army in quick fashion.

Consistency and the Golden Mouse[edit]

If NaDa’s career had ended in 2003 he would still be known as a great player. However it has been his steady results through the years that have turned him into a legend, included with both the Four Kings of old (with Boxer, Yellow, and Reach) and the five bonjwas (with BoxeR, iloveoov, sAviOr and later - Flash). For a short period he passed his impossibly long reign of invincibility on to iloveoov and was merely a “good player who had only won one OSL and it was a while ago”, despite reaching multiple finals. However in 2005 he won the IOPS OSL, this time with new and improved TvZ. Featuring almost purely SK Terran strategies, NaDa went 0-1 vs Terran (iloveoov), 0 games against Protoss, and 10-2 against Zerg, including another 3-0 final against the previous champion JulyZerg, who was especially known for his ZvT. Additionally NaDa placed 3rd in the second KT-KTF Premiere League and almost won the YATGK MSL but lost in the finals to GoRush, another strong ZvT player who was responsible for his 2 losses in the OSL.

Unfortunately it was shortly after this point that tragedy struck and NaDa’s father died in a traffic accident. [1] The shock of this would drive NaDa all the way out of the preliminaries and into a slump. A true fighter, NaDa clawed his way back out of the offline preliminaries, through the Dual Tournaments, and back into the Starleague. After winning his second OSL he had joined the ranks of a few players (Garimto, BoxeR, JulyZerg, and later iloveoov) that could wear two badges. NaDa, however, sought the fabled Golden Mouse. He had stopped July’s attempt and BoxeR had also failed.

NaDa reached the finals of the 2006 Shinhan Bank OSL Season 2 to face Anytime, the same player who beat BoxeR a year earlier. Anytime was backed up by the powerful Legend of the Fall which dictated that a Protoss player would find victory in the fall season. NaDa was backed up by something even more powerful: a burning desire to be known as the best of all time. In a dramatic 3-2 series NaDa trounced Anytime using a classic dropship harass strategy in the fifth game to lay his claim to fame as the only player to win 3 OSLs and in completely different eras. Additionally, NaDa remains the best example of someone breaking the OSL Curse, where the champion of the previous Starleague often performs poorly in the following one, by rocketing all the way to the finals of 2006 Shinhan Season 3 before losing to sAviOr 1-3. NaDa was able to overcome the maestro sAviOr in early 2007 in the Shinhan Masters tournament of champions.[2]

Though he did not maintain the same high level of success in the last few years of his career, NaDa still won special events and appeared individual and team leagues with regularity. In 2010 NaDa retired from StarCraft: Brood War, citing a lack of passion for the game, and shortly thereafter moved on to play StarCraft 2. In terms of achievements, periods of dominance, and staying power, NaDa is easily the most accomplished StarCraft player of all time.

He played StarCraft II for a while before becoming a coach for AZUBU. After the disbandment of AZUBU, he enlisted in the army to complete his mandatory service.

On April 15, 2015, NaDa posted that he had been discharged from compulsory enlistment and would be returning to streaming on Afreeca[3].