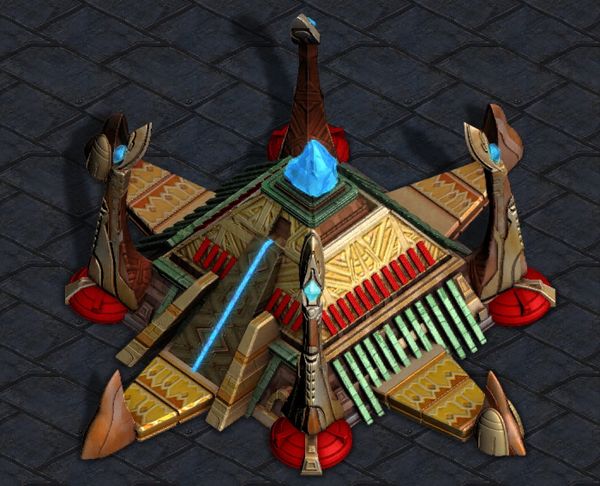 The Nexus is the most important Protoss building. It produces Probes, the worker unit, and is at the root of the Protoss tech tree. It is also the Protoss resource gathering center; without it the player cannot gather resources. Protoss players start the game with one Nexus, with the base surrounding it referred to as the "main".

Analogous to the Terran Command Center, the Nexus does not research any upgrades, nor build units beyond the harvesting unit.

Strategically, sometimes is it viable to snipe an opponents Nexus in a 1v1 or 2v2. This will severely disrupt the opponent's production, causing the opponent to be behind economically or be unable to rebuild a new Nexus if the opponent does not have 400 minerals. Because the Nexus has a formidable 1500 hit points, sniping of enemy Nexuses is generally conducted with units such as speed/attack upgraded Zerglings (Cracklings) or speed upgraded Zealots (Speedlots), and even occasionally a mass of air units like Mutalisks or Carriers. Sniping Nexuses tends to be more common than targeting Command Centers because they can Lift Off to evade attack and Zergs usually have more Hatcheries. In most match-ups, it is common for the Protoss player to surround the Nexus with multiple defensive Photon Cannons and one or more High Templars armed with Psi Storm, particularly those Nexuses located at expansion bases.