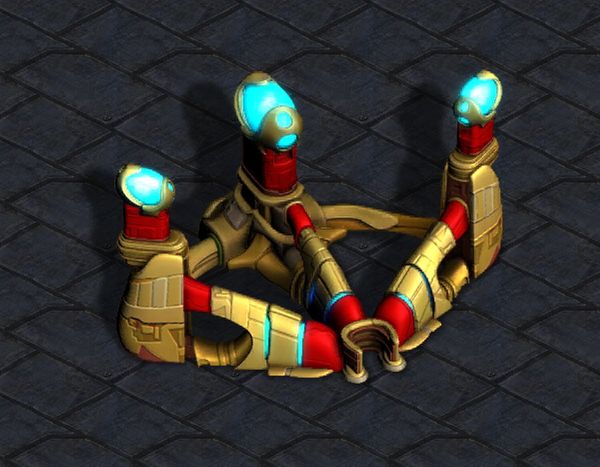 The Observatory is an advanced Protoss building. It allows the Robotics Facility to produce Observers, which are very useful for scouting, as they are permanently cloaked and are also detectors. The Observatory produces no units directly, although it allows the research of a sight range and movement speed upgrade for Observers.

Its own Plasma Shields can be upgraded at the Forge. The Observatory is powered by the Pylon, but if the Pylon becomes destroyed, the Robotics Facility would still be able to produce Observers.

The Observatory is generally built in all match-ups due to usefulness of the Observer unit. This requires some pre-planning, as it is fairly high up the Technology tree. However, there are a number of threatening cloaked units, and a lack of mobile detection is a severe hinderance for the Protoss player.

Observer upgrades are frequently researched. The speed upgrade is generally the first to be researched at the Observatory, mainly to allow Observers to move as fast as the Protoss army. This is especially true in PvT, as when using non-upgraded observers Dragoons require constant attention to prevent them from walking into mines. A faster Observer speed also increases the life span of the Observer when it encounters enemy fire.

In the PvT and PvP match-ups, the Observatory is usually built by the mid game to enable the Protoss player to produce Observers for mobile detection for Terran Spider Mines and Protoss Dark Templars. It is common for the Protoss player to leave an Observer inside the Terran or Protoss opponent's base for scouting purposes, provided they are not detected.

In the PvZ match-up, the Protoss player may opt to delay constructing the Robotics Support Bay until the mid to late game, depending instead on Photon Cannons for cloak detection. The Protoss player will rely on early Corsairs for scouting, further obviating the need for early Observers. Nonetheless, Observers are crucial for mobile detection of Zerg Lurkers. In the late game the speed upgraded Shuttle is particularly helpful during High Templar/Psi Storm drops.