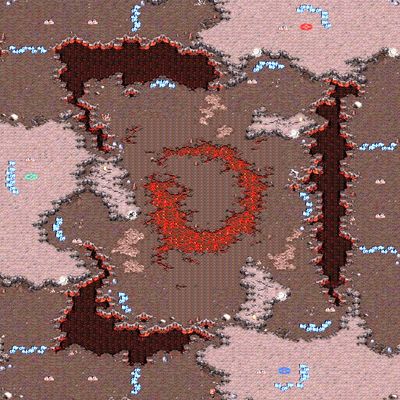 Outsider was introduced in the fourth round of the 2008-09 Shinhan Bank Proleague season as one of four new maps for the round. The main feature of the map is the ring of expansions along the edge of the map; with two ramps in the back of each main giving access to one side and a mineral only. However, what looks like a mineral only from the side of your main can be acquired as a Gas Expansion on the other side of the Mineral line, right next to this is the expansion accessible from one of the adjacent main bases. A player can also opt to place their expansion in between the two Gas geysers to increase Gas income while sacrificing the ability to easily mine Minerals. Most games involve some sort of harassment at the many expansions along the edge; Terran can drop Siege Tanks, Protoss can drop Reavers or build Cannons behind the Minerals, and Zerg can drop Lurkers or Hydras.

When Outsider was first released in Proleague Round 4, many progamers jumped workers over the mineral lines to set up a relatively safe (from ground units) expansion. Without access from ground units, though, these expansions proved too vulnerable to drops, and many have settled with accessing the mineral-only first, then expanding between 2 vespene geysers late-game.

Outsider SE is one of the five maps used in the 2009-10 PokerStrategy.com TSL.