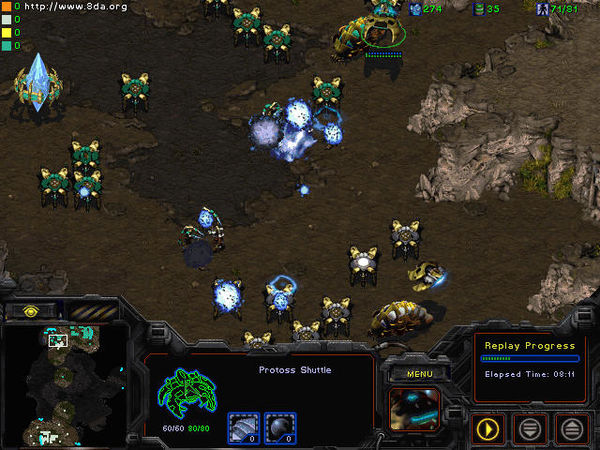 The following article lists a general introduction to Protoss Mirror Match Up.

The Protoss match-up is fast paced, complex and methodical. Gateway units are typically produced in large numbers as they are cost efficient and strong, allowing the Protoss the opportunity to control the map and expand safely or to pressure their opponent early. From there, many different tech trees are opened up and with them come the most powerful units the race has to offer primarily used to supplement Gateway based armies. The victor is often determined by the player that best utilizes the high micromanagement potential of their units. The Protoss mirror is stylistic and diverse with many strategies to employ and many build choices, owing to the in-depth tech tree and unit variety of the Protoss race.

A short description of each unit, specific to the match-up. Click on the name of a unit for more in-depth information.

Probes are primarily used to scout the enemy base or support combat units in a defense as well as their main duties of being a worker. Probes are sometimes used to place Manner Pylons. They can also be used to place three Pylons in a V formation in front of an enemy's Gateway to trap any Dragoons coming out of the Gateway (this is referred to as a Pylon Prison). Probes may place an Assimilator to disrupt the opponents collection of Vespene Gas.

Both +1 armor and +1 shields give Probes an extra hit against Dark Templar.

Zealot usage against Protoss opponents varies: sometimes, the early game is all about matching Zealot production with the opponent in hope of gaining a slight advantage. In other cases, such as 1 Gate Core build orders, only a few Zealots are produced early on, with more being added when the Leg Enhancements upgrade is complete and Zealots can be mixed with Dragoons to create an effective army of both close-up and ranged attacks.

In PvP, sometimes a Protoss will go mass Zealots in a strategy called Spirit Protoss involving multiple waves or all-ins of Zealot forces.

In Zealot versus Zealot battles, to increase the effectiveness of these units with micromanagement, heavily damaged Zealots are often temporarily removed from the front line to draw enemy fire to other Zealots with more health.

Dragoons compose the majority of early-game armies in PvP because they are ranged and faster than Zealots (before the Zealot's Speed Upgrade is researched), with proper micromanagement Dragoons can kite Zealots indefinitely. In late-game PvP, Dragoons can support armies based on the engaging power of speed upgraded Zealots (speedlots), High Templar, and Archon. In PvP Dragoons are also essential for defending against Reaver drops and other Shuttle play. If a Protoss player anticipates a drop, he will often keep three Dragoons in his main to repel it.

High Templar are a staple of mid-late game PvP armies, providing devastating area damage against opposing Zealots or Dragoons. As in other match-ups, High Templar can be used to assault the enemy economy, devastating mineral lines with one or two carefully placed Psionic Storms. When High Templar come into play, Shuttle micro with Reavers becomes far less useful.

Archons are a strong counter to Zealot heavy armies, since their splash damage is very effective against clumped Zealots. Nonetheless, it is generally advisable for the Protoss player to not merge all available High Templar into Archons as Psi Storms are very effective in the midst of battle.

In the PVP match-up, Dark Templar are not used as often as other units produced by the Gateway, but still serve a purpose. In some cases, Protoss players will opt for a quick DT rush to surprise the Protoss opponent who does not scout properly or build Observers. In more conservative builds, Dark Templar by the mid game can provide map control, scouting for expansions without detection. Often times, Dark Templar can be dropped into the opponent base and sent to attack any harvesting Probes, thus disrupting the opponent production. This is particularly effective if no Observers or Photon Cannons are present, or if the opponent's troops are stationed far away. Since Dark Templar kill Probes in one hit, there is no warning to the Protoss opponent that its Probes are under attack. Careless players can lose dozens of Probes to a single Dark Templar (see Bisu vs Jangbi Clubday MSL Finals).

Although rarely seen in the PvP match-up, Dark Archon may use Feedback to counter the opponent's High Templar. Because the Feedback spell can be cast at a very long range, it can be used to turn the energy of the High Templar against itself, potentially destroying the unit and at the least inhibiting its ability to cast spells.

Mind Control can be employed to steal units of high value such as Carriers or Arbiters, expending the energy and shields of the Dark Archon and making it vulnerable to counterattack. Mind Controlling a Shuttle causes the victim to lose control over the units within the Shuttle.

Reavers are a staple of PvP play, being used not only to defend expansions and allow players to expand safely, but also to harass the enemy mineral line and kill their Probes, leaving the Protoss opponent with a significant economic disadvantage.

Reavers are also used in army engagements, being a component of a standard early-midgame PvP army alongside Dragoons. They are often the highest priority target in engagements, as their high damage and splash can easily turn the tide of battle. Shuttle micro is essential for using Reavers effectively, picking up the Reaver at the correct time will allow it to dodge incoming Dragoon fire. Reavers become more vulnerable as Psionic Storm is researched as the heavy damage of the Psionic Storm will damage the Shuttle transporting the Reaver as well the Reaver itself if it is unloaded in the radius.

Observers are used to detect Dark Templar and other Observers. Furthermore, Observers are also used to scout Gateway count, army composition, and army position of the enemy Protoss. A Protoss that protect their Observers and destroys rival Observers will be able to maintain a monopoly over vision, keeping their foe in the dark.

The Shuttle is used to move Protoss units around the battlefield quickly. The Shuttle is often combined with a Reaver to make up for its slow speed and vulnerability, able to reposition it rapidly as well as the High Templar to allow the Protoss player to put them into good positions to use their Psionic Storm. If the opponent lacks detection, Dark Templar drops allow the Dark Templar to infiltrate the enemy base to eliminate workers and structures quickly.

Scouts are a strong counter to Carriers and have a low damage ground attack that may be used to support ground units in combat or harass enemy workers. In Bisu vs Much, Incruit OSL, Bisu attempts to use Scouts to counter Much's 1 base Carrier strategy.

Dragoons lack the attack range and mobility to effectively counter Carriers on their own, though they do decent damage to Carriers caught in the open. Although Scouts can take out Carriers when in large numbers, they require time to amass and upgrades to be effective. One may use the Moving Shot to get the most out of one's Scouts.

Carriers and their Interceptors are much more vulnerable to Protoss spells, such as Psionic Storm, Stasis Field, and Mind Control than to direct combat.

High Templar are a high priority target for Carriers, so it is best to quickly get one's storms off before they are targeted and eliminated. Dark Archons are difficult to mass, and require 100 energy + the 50 they start with to use Mind Control, so it is best to get them only if one see one's opponent getting Carriers early or if one's opponent is predictable.

Arbiters can Stasis Carriers, eliminating their mobility so one can position one's units under them and kill them when they unfreeze.

Protoss vs Protoss very rarely gets to the point where players can use Arbiters. When it does though, Arbiters can be a much more useful unit than Carriers. In modern play, if a Protoss player goes Carriers, the other Protoss player will often use mind control to steal away control of the Carriers. Arbiters are much less prone to that, as they are likely to be destroyed immediately after having been mind controlled.

Maps like Destination, where a deadlocked split-map will often occur, are more likely to see Arbiters in PvP.

Corsairs are not used much against other Protoss as they serve no purpose that cannot be filled by other units to potentially greater effectiveness. The Corsair may use the Disruption Web ability to take an opponent by surprise in an engagement. In Bisu vs Nal_rA, GOMTV MSL S1, rA attempts to make use of the Corsair by deflecting multiple Shuttle harassment attempts while teching to Carriers in this semi-island map.

Scouting plays an important role in the Protoss mirror. Obtaining information makes it easier to adapt to enemy strategies and allows you to prevent rushes, stay equal in economic power and not be taken by surprise. The Protoss roster has many units for harassment and so great care must be taken to maintain vision over your opponents movements.

In the end game Observers are still being used to detect basically the same information than in the mid game. However, the focus on potential new expansion becomes increasingly more important. In addition, single Probes or Zealots (or related cheap units) can be used in towards the end game.

Note for Beginners: It is always possible to simply copy the opponent's strategy early on. Furthermore, in many scenarios players will be playing with very similar Build Orders either way. Consequently one of the more common situations will be explained

In most games both players will be opening with one Gateway and one base. Usually, both players will not build a Cybernetics Core straight away, but train one or more Zealots in the beginning. The Zealot is either used to block the entrance to the own main base (thus hiding the own strategy) or, if more Zealots are built, to either harass the opponent (targeting his Probes) or to defend harass. Once both players are sure they're not having to defend against a larger number of Zealots, they will tech on to Dragoons relatively quickly.

In most scenarios a player now has to decide whether or not he will chose a Robotics Facility with two Gateways and Reavers, a Robotics Facility and three Gateways with Observers, or a Dark Templar opening. Reaver openings are usually played rather passive, as only few Dragoons are available for a longer time frame. Observer Build Orders allow for a faster attack, once the Observer is out. Dark Templar openings offer the option to expand relatively fast, while the Dark Templar buys time for Cannons to warp in.

Regardless of the opening, both players will move out rather late and test the waters so to speak. In many scenarios the first larger fights might mean the end of game, as a larger armies counter smaller armies. In scenarios in which both players are only threatening the opponent, since their armies are somewhat equal, the Natural Expansion will be taken. Once the Nexus is running, more Gateways are added and the Dragoon heavy initial army will be replaced by the Death Ball.

Attacks are usually done with more care, as army positioning on the map play a more important role. In most long games both player's armies match each other in terms of strength, hence map features are abused to gain an edge. Fighting from higher ground gives additional bonus, as well as choke points are used to clump the opponent's army. Depending on the player's mentality passive aggression and simultaneously expanding will be done until the late game.