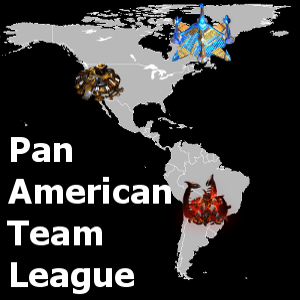 Having noticed a distinct lack of players representing North, Central and South America compared to our friends across BOTH oceans, Psyonic_Reaver thought about ways to bring back old players and hopefully introduce new players to the joys of Clan Wars. His goal is to reinvigorate the Americas scene and he invited all players of North, Central and South America to participate in the Pan-American Team League in August of 2017.

Most questions surrounding PATL can be answered in the Pan-American Team League: Discussion thread on TeamLiquid.

ProLeague Style Best of 7 Format for Semi-Finals and Finals

As quoted directly from Psyonic_Reaver in the thread. Click the Expand/Collapse link to view/close the Rules top corner of the box below.

2. Once Lineups have been submitted, they are LOCKED to those race Match-Ups on those maps. If a player fails to show for their match but a teammate is online, that teammate can "sub" themselves into that match but playing as THE original player's race. That means NO RACE PICKING and RANDOM is not allowed.

TO ALSO CLARIFY - One player may ONLY play up to possible THREE games per week. So that means 2 - 1v1's or 1 - 1v1 and 1 - 2v2 and then the ACE match if the match series gets to the ACE. One player could possibly sub for his entire team and even doing 1v2 or 1+1AI v 2. The caveat to that is it can only be done ONCE per player per season.

Example: Louder[light] didn't show up for his match vs Artosis[media]. It was a PvT on Circuit Breaker. Luckily Machine[light] is online and can "sub" for Louder. Sadly he can't play his preferred race of Zerg since the MU was submitted as PvT on CB. Machine will have to play as Protoss vs Artosis' Terran.

3. Clans must have AT LEAST 3 players to enter and participate. (No Smurfing to bolster your numbers, if you get caught you will be disqualified and removed from PATL.)

You could, if you want, have a "B" team and a "C" team and so forth all bearing the same Clan tag. These teams would all be seeded into the PATL to play against each other and other Clans.

Example: [light] has 20 members of their clan. The odds of EVERYONE getting to play each week is low. Xeris wants everyone to have fun and play. He decides to retain his top 4 best players as [light] Team "A" his next 4 as [light] Team "B", etc and so forth. OR if he was CRAZY he could split his "best" players among multiple teams filled with his "mediocre" players. This would foster more friendly competition inside the Clan and against other Clans. That's Xeris call to make as Clan Leader.

You can recruit new players and remove players from teams as needed but you can NOT swap them between sub-teams every other week to better your odds. I'll get tired of that real quick and lock players down to a single team for the rest of the season. If it's a once per season thing, that's fine.

If a player TRUELY defects from one Team to another Team I'll consider that on a case by case basis but if it happens every other week... I'll get tired of that real quick and lock you down to just one team the rest of the season. If it's a once per season thing, that's fine.

5. English is PREFERRED but NOT required to participate. I am fluent in Spanish, if any Spanish Players/Clans need help organizing, contact me via PM.

6. Players MUST LIVE AND RESIDE in the North, Central or South Americas to participate.

7. NO SMURFING - This does NOT give you the right to attempt to pull one over on me. I've already had ONE player try to do this and the Season hasn't even started yet and I caught him. He got a warning. If anyone attempts to do this you will be BANNED for the rest of the Season. This is my ONLY warning on the matter. I have methods to track this, do not test me.

8. All matches will be attempted to be played on Battle.Net - USWest. Channel: OP PATL Default Turn Rate of 8, unless both players agree to a higher level. If players do not wish to have observers, then observers MUST leave.

9. Be honest and respectful to each other and have fun.