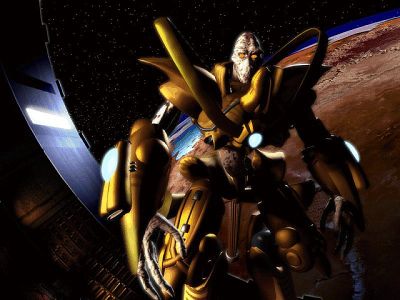 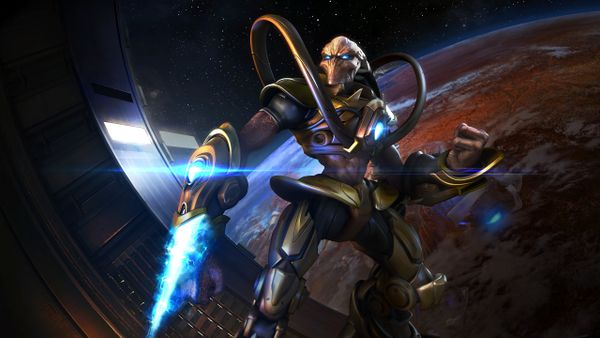 In stark contrast to the adaptive Terrans and feral Zerg are the stolid, conservative Protoss. With their highly advanced technology and strong psionic abilities, the Protoss have long considered themselves the most powerful species in the known galaxy. Although they are not a physically prolific people, they have learned to bolster the ranks of their military with robotic war machines and to combine their intrinsic psionic ability with technology, thus producing some of the most effective warriors ever known. If the Protoss have a weakness, though, it is their refusal to accept change. The tenets of their major religion, known as the Khala, form a rigid path and the Protoss are loathe to deviate from it for fear of once again falling into civil strife.

Although the Protoss were originally divided into several warring tribes, they were united by a single scholar/philosopher known as Khas, or "he who brings order". Having studied the archaic, forbidden teachings of his ancestors, this mystic unearthed ancient, monolithic artifacts known as the Khaydarin Crystals. The power contained within these crystals -- along with his teachings -- are apparently responsible for the strengthening of the primordial, psychic link that all Protoss share. Khas also developed a strict religious, philosophical, and social structure christened the Khala. Under the Khala -- which translates roughly to Path of Ascension -- the Protoss have abandoned the crude tribal factions that led them into generations of vicious blood feuds and have instead created three castes: The Khalai (artisans and inventors), The Templar, (warriors and explorers) and The Judicator (administrators and leaders).

The enigmatic Protoss have access to powerful and diverse units, ranging from simple but sturdy early-game units to speedy fliers, stealthed damage dealers, long range siege units and devastating spellcasters. All Protoss units possess an energy shield, acting as a buffer that the enemy must break through before damaging their true health pool, making the Protoss army more durable in comparison to the Terran or Zerg. However, Protoss units are individually more expensive, slower and take longer to produce than their rival races, adding an incentive for the Protoss to control their units effectively and deal as much damage as they can before expending them.

A well-executed attack requires much preparation and strategy for a Protoss as the slower speed of a Protoss army can make reinforcing and retreating difficult. Because of this slow speed, a Protoss may utilize the harassment potential of units such as the Dark Templar, Shuttle and Reaver or Corsair to confuse and spread their opponents forces to multiple locations at once. The Protoss' army allows for a diverse range of builds and strategies, amplified in effectiveness by the micromanagement skill of the Protoss himself.

The Nexus is the heart of the Protoss army and where the Probe is produced, the Protoss worker. Probes work together to harvest resources and produce structures necessary for the Protoss war machine. The Probe has the unique ability to warp in several buildings at once, powered by a Pylon.

Gateway units include the melee Zealot and the long-range Dragoon. The Zealot is a slow moving melee unit but is highly damaging, cheap and defensible. The Zealot may be upgraded with Leg Enhancements, making it much faster and more versatile, able to scale well throughout the game. The Dragoon is a fast moving, high health unit able to outrange most units with the Singularity Charge upgrade, making them synergize well with Zealots who can shield the Dragoon and allow them to fire from the back without harm.

Through the Templar Archives the Protoss may obtain the High Templar, a feared spell-casting unit able to put down highly damaging Psionic Storms, able to wipe out large clumps of units quickly or Hallucinate units to confuse the enemy. Dark Templar are also produced from the Templar Archives and have a permanent cloaking effect, allowing them to hunt down targets across the map and infiltrate enemy strongholds without being seen. Two High Templar may combine to form the Archon, a heavily shielded ground unit with a short-range but highly damaging splash attack. Two Dark Templar may combine to form the Dark Archon, a highly specialized unit with no conventional attack that is capable of casting powerful spells such as Mind Control to instantly take over enemy units, Maelstrom to pin units in place or Feedback to kill rival casters.

The Robotics Facility enables the Protoss to recruit units such as the Reaver, a slow, long-range artillery unit that fires Scarabs that have the potential to inflict massive damage to both units and structures. The slow speed of the Reaver is remedied with the use of a Shuttle, giving it the ability to fly around the map to disrupt mineral lines and take units by surprise. The Observer acts as the main form of detection for a Protoss army, able to fly around the map with a permanent cloak to keep a watchful eye on enemy troop movements and observe their bases.

From the Stargate come air units such as the Scout, a heavy air unit capable of a light ground attack or devastating missile volleys against capital ships. The Corsair is a fast anti-air unit able to quickly intercept enemy units or prevent the enemy from attacking within its Disruption Webs. The Carrier is a capital siege ship with an incredibly longe range, able to launch Interceptors to swarm the enemy. The Arbiter projects a permanent cloaking field within its radius, cloaking nearby allied units. The Arbiter is able to move large amounts of units across the map almost instantaneously with its Recall ability. It may also freeze enemy mechanical units with Stasis Field, removing them from combat for a long duration.