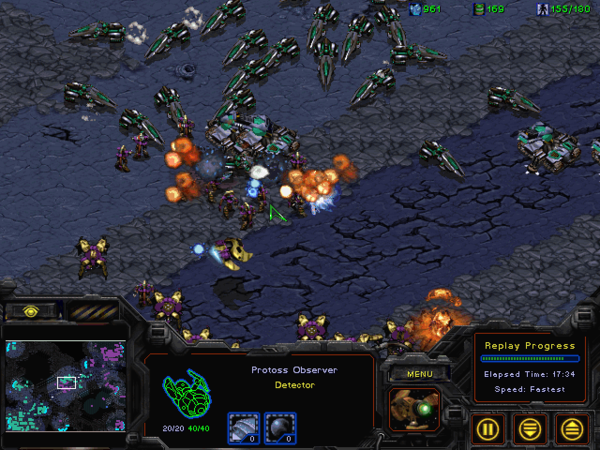 The following article lists all relevant build orders and strategies for Protoss.

The enigmatic Protoss have access to powerful and diverse units, ranging from simple but sturdy early-game units to speedy fliers, stealthed damage dealers, long range siege units and devastating spellcasters. All Protoss units possess an energy shield, acting as a buffer that the enemy must break through before damaging their true health pool, making the Protoss army more durable in comparison to the Terran or Zerg. However, Protoss units are individually more expensive, slower and take longer to produce than their rival races, adding an incentive for the Protoss to control their units effectively and deal as much damage as they can before expending them.

A well-executed attack requires much preparation and strategy for a Protoss as the slower speed of a Protoss army can make reinforcing and retreating difficult. Because of this slow speed, a Protoss may utilize the harassment potential of units such as the Dark Templar, Shuttle and Reaver or Corsair to confuse and spread their opponents forces to multiple locations at once. The Protoss' army allows for a diverse range of builds and strategies, amplified in effectiveness by the micromanagement skill of the Protoss himself.

The Protoss macro management is relatively similar to a Terran's base management. Both races can produce workers (SCVs and Probes respectively) and fighting units from different structures (Command Center and Nexus respectively) and additionally research upgrades in tech buildings or add-ons. In comparison to Zerg, the underlying logic is easier to understand. Protoss in most cases does not need to make a decision whether or not Probes should be produced. If not stated otherwise, a Protoss will always constantly produce workers throughout the entire game. An overflow of workers on one Nexus will most times to be transferred manually to a newly built expansion (Maynard Slide).

However, building placement, often also referred to as Sim City, plays a higher role for Protoss players than it does for other races. All buildings, except the Nexus and the Assimilator, need to be powered by Pylons. Each Pylon creates an energy field around it, in which buildings can be warped in. This has several consequences.

For one, a single Pylon powering important buildings, especially Photon Cannons or Gateways, can become a higher prioritized goal for the opponent. If the Pylon is lost, the buildings can not be used to research upgrades or to train units. One Pylon powering many pivotal buildings is often referred to as "Artosis Pylon".

Secondly, Gateways and Robotics Facilities always spawn newly trained units at their bottom exits. This is especially important if buildings were warped in as groups or clusters. Dragoons in particular often get stuck between Pylons and Gateways and thus can not leave the base anymore. This fact can be abused by Protoss players to construct a so-called Pylon Prison.

Even though Protoss only needs few hotkeys to handle an army, his keys should be used with care. By building Gateways in clusters, only one hotkey might be needed to train units faster.