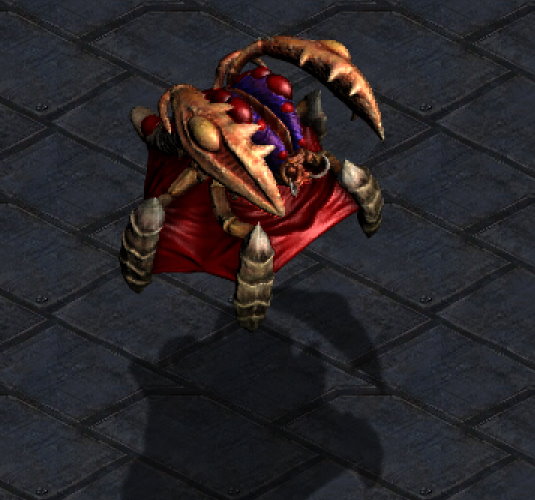 The Queen is a quick-flying Zerg air unit with the ability to cast multiple spells.

The Queen has a variety of abilities that can be researched, and its armor, or Carapace, can be upgraded at the Spire.

The Queen functions as a support unit, as it itself has no direct attack ability. Due to its high Vespene Gas cost and additional costs for researching its abilities, most Zerg players forgo its use, instead opting for additional versatile attack units like Mutalisks or potent spread-damage units like Lurkers. Queens are also not primary options because of the time necessary for them to generate sufficient energy before executing their abilities. Additionally, Queens must carefully navigate through and around opponent fire due to their inability to defend themselves. Finally, Queens may be disregarded due to the additional micro management necessary to control Queens as they cast their spells, with the process becoming more unwieldy when a group of multiple Queens are involved.

Ensnare is useful for units trying to escape, or in the opening moments of a battle.
It's really useful in ZvT since it negates the effects of stim on Marines and Firebats.
Ensnare is especially effective against raiding enemy air units, allowing your own anti-air units to catch and destroy them, providing an advantage during Mutalisk vs Mutalisk battles.

For detailed information on the effects of Ensnare, see the related Article. It's best used on expensive units such as High Templar, Siege Tanks, and Ultralisks. Due to its high energy cost and micro required, Spawn Broodling is rarely used. If the targeted unit is a Detector, the player can also see invisible units.
If the targeted unit is moved into a Dropship or Bunker, the player loses its sight.
Parasite can be removed by the Medic's Restoration ability or if the units morphs into another unit or building (excluding Archon warp). Only one parasite can be on one unit, so the Zerg can remove enemy parasite with its own Parasite. Protoss can Mind Control enemy Queen and cast Parasite, or simply sacrifice the unit.
Enemy units that are infected display a green outline in the Wireframe view and are easily visible if selected by the enemy player. If the Zerg removes an enemy Parasite by applying its own, the Zerg would no longer see the Parasite on the unit.
Parasite is best cast on expensive units (ones that your opponent is hesitant to destroy or move out of battle), transport units (to negate surprise drops), or mining workers (unlikely to be selected by opponent).

Queens are rarely used in the ZvZ match-up, but occasionally appear in the longer late game situations. Instead of attempting to tech to Hive in the ZvZ midgame, a feasible alternative is to build a small number of Queens with Ensnare. Since Mutalisks tend to stack, a single Ensnare can cripple a large number of them. The Mutalisks are then forced to fight at a disadvantage, as their attack speed is now greatly reduced, and escape from Mutalisks and Scourge is difficult due to the slowing effect of the spell. If the opposing Zerg is teching to Hive, this attack has a timing where it can potentially deal damage before Hive tech becomes useful. However, this strategy is not without risks, as the resources needed to build the Queen's Nest and research Ensnare could have been used to produce more Mutalisks.

Queens are also viable in Hive tech situations. Spawn Broodling is extremely effective way to remove high value targets, such as Lurkers, Defilers, and Ultralisks, from the playing field. In addition, Spawn Broodling is unaffected by Dark Swarm, and can thus be used to help break defensive lines or contains. It is noted that these late game units are rarely built due to the rarity of Hive tech games.

ZvT is the match-up where Queens are most commonly used, but nonetheless is relatively rare. Their rarity is due to the costs involved in generating and researching Queens, time necessary for them to generate sufficient energy, and micro management necessary to control Queens through defensive forces and Missile Turrets without any attacking ability on its own. Further, the current ZvT match-up is commonly a macro-based game where the Zerg attempts to establish a large economic advantage in the face of relatively slow Terran forces.

Nonetheless, Queens can be an effective counter to large Siege Tank formations with the use of Spawn Broodling. This is particularly the case in games during the late game to help the Zerg to break through a strong defensive wall of Tanks at the Terran base. Spawn Broodling allows a Zerg player to destroy a Siege Tank instantly. With a sufficient number of Queens, the Zerg player can kill enough Siege Tanks to enable the Zerg ground forces to break through the Terran defenses. Siege Tanks are commonly found in the back of the Terran formation, while inexpensive mechanical units such as Vultures soak up damage and deploy Spider Mines at the front. As Queens have a high movement speed, they may be able to create havoc within the tank lines before the Terran is able to react. Due to the high energy cost of Spawn Broodling, it is common for Zergs to keep their Queens in a safe location until they have recovered enough energy to be used in combat.

Ensnare is best used on a concentrated clump of Terran Infantry units. The effects of ensnare neutralize most movement and increased firing rate benefits Marines gain from Stim Pack, and makes it easier to both outflank the Terran army and prevent it from escaping. It can also be used to reveal (if Cloaked) and help hunt down speedy Wraiths.

Parasite is occasionally used to provide the Zerg player vision to Terran units, as well as to harass the Terran player. When applied to a high value unit such as a Science Vessel, Siege Tank, or Battlecruiser, the Terran player must scramble to quickly move it out of important map locations, destroy it with friendly fire, or locate a Medic to Restore it.

In theory, Spawn Broodling could be used on enemy High Templar, but the cost in Queen production, time necessary for the Queen to generate energy, vulnerability of the Queen to being destroyed by Protoss forces before reaching the target, and micro management necessary in executing the spell make it a challenge.

Ensnare is effective when cast on groups of Interceptors or Carriers, thus making it easier for the Zerg to target them with Devourers and Scourge. Note, however, Ensnare does not affect how fast Reavers fire.

In other applications, maps such as Holy World featured a neutral Command Center in the middle of the map. If a Zerg player infested this Command Center with a Queen, it would enable the Zerg to build and employ Infested Terrans against the opposing Protoss player.