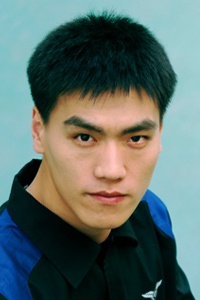 Park "Reach" Jeong Seok is a retired StarCraft progamer from South Korea who played Protoss for KT Rolster. He is perhaps best known as "Man Toss" for his incredible macro and reckless, cavalier micro play-style, as well as for the fact that he continued playing Protoss despite increasing pressure to play other races during that time. Together with GARIMTO, he helped create the Legend of the Fall. He currently is a League of Legends and Tekken coach for NaJin e-mFire.

From Pusan, Park Jeong Seok was initially taken on by Hanbit to be a 2v2 specialist. Partnered with H.O.T-Forever, he gained a fearsome reputation as a powerful team player. After the release of revealing photos depicting an unclothed Reach posing with a similarly naked H.O.T., his fame increased.

However, he showed lackluster performance as a 1v1 player. In 2001, he made somewhat of a splash in SKY2001 OSL--though he was eliminated early on, he was the only Protoss player in the tournament to have a winning record against BoxeR--and the only player in the tournament aside from GARIMTO to have taken a game from him. The win was due to those qualities that made him famous: his incredible macro, uncanny storming abilities, and godlike micro. He was the prototype macro player; before iloveoov, there was Reach. While his micromanagement of all Protoss units shone, his ability to crank out legions of holy Protoss to do his bidding led to the rise of his star.

The following year, he won the 2002 SKY OSL, again beating BoxeR in a convincing set of games in the finals to take the crown. Of note is their game on Neo Forbidden Zone; Reach shows signature shuttle/templar play, giving him the nickname Mudang Toss. From then on, he was hailed as the hope and the Hero of Protoss – throughout the dark times of Protoss, he maintained top 5 KeSPA Ranking for longer than any other. Sometime during early 2004 Reach was offered an 80,000,000 won per year contract by KTF; he took them up on their offer; it was renewed the following year for 230,000,000 won. During the crisis of the Mercury era - Gamevil OCL, G-voice OCL, Gillette OSL, EVER 2004 OSL - Protosses were being annihilated. Mercury holds a sub-30 percent win rate for PvZ; but in that time, Reach lived up to his name, and trampled his way through all opposition.

However, in Gillette, he still fell to a horribly dressed watermelon (July) 1-3 in the finals; and in EVER, he lost 2-3 to the monster known as iloveoov in semifinals. In the third place match of the latter, he beat his friend and teammate YellOw 3-2. In the post-game interview, he announced that the second game on Requiem was his favorite because he won “in true Protoss fashion” with a two-gate rush – he ended by claiming that “a true man’s pride should be his zealots”. Along with such statements as “Protoss is a man’s race – it is both tough and straight”, these publicity affairs gave him an aura of manliness.

The following year, Reach triumphed over his teammate ChoJJa 3-2 to advance to the finals of 2005 UZOO MSL. There, he suffered defeat against the up-and-coming ipxzerg – another loss to another Zerg 1-3 in the finals. Shortly thereafter, he entered a long slump – the fabled KTF Captain's slump - and again he reverted to his old role of 2v2 specialist in ProLeague, partnering first with YellOw and subsequently with ZergBong. Yet, in 2007, after over a year in offlines, when all hope seemed lost Reach woke up, and remembered he was the Hero of Protoss. Trampling through offlines with a perfect record, and then losing only one game in Dual Tournament, Reach returned to the arena in Daum OSL. Amidst cries of his fangirls he advanced with a perfect record to quarterfinals. Yet, tragically, he lost to Stork 1-2, and was eliminated from the tournament.

He continued to be a valuable 2v2 resource for KTF, and also played a large part in the upbringing of their newest star, Flash. In 2008 Reach joined Air Force ACE and entered another severe slump, but qualified for the 2010 Korean Air OSL, though was knocked out early by Hiya. He has since returned to KT as captain.[1]

Reach was, together with Nal_rA, the key Protoss on KTF during their prime and one of The Three Kings. Their partnership is the reason why Protoss players from KTF have a bit of mystique around them. The KT Protoss players haven't reached this pinnacle again. Only recently, Stats and Violet have started performing well.