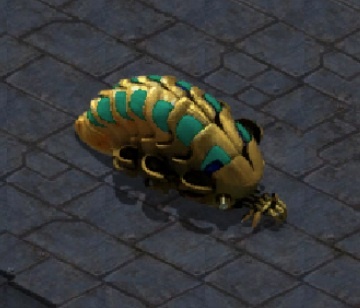 The Reaver attacks by building and launching Scarabs that it houses. Scarabs themselves have a small cost and build time to create (much like the relationship of Interceptors to Carriers). Scarabs explode on contact to produce major damage (similar to a Spider Mine) and can be launched at a range of eight, which is slightly further than that of most base defenses and, perhaps more importantly, other un-siege specialized units. Like other siege units, the Scarabs cannot hit air targets. Scarabs are unique in that they can maneuver around impassible points (although they can technically go through units). Scarabs are the strongest attack in the game, capable of killing clusters of workers and weaker units in one shot. Although potent, Scarabs fire very slowly due to the Reaver cooldown period between shots.

While the Reaver is very slow in movement, when used in a speed-upgraded Shuttle, it becomes a deadly and mobile harassment unit. When traveling with other Protoss infantry, it works well as a strong support unit during attacks. Reavers are particularly good on maps that have start locations close to each other.

Although Reavers have a relatively high pool of life, at 180, like certain other strong Protoss units, they are very fragile relative to their costs due to the long cooldown period between fire and lack of mobility.

It is famous for having "buggy AI" in that Scarabs will often "dud" into the ground and not hit the target at all, getting temporarily stuck or pausing along the way. This happens most often when workers like Probes are targeted as the pathfinding for the Scarab has trouble finding a path through all the other Probes nearby.

Researched at the Robotics Support Bay.

A detailed guide about this can be found here.

Reavers are often used in late-game PvZ armies because of their high damage output (with splash). Paired with Gateway units to absorb damage, Reavers can combat Ultralisks/Zerglings with greater efficiency than Zealots and Archons alone. The Ultralisk's high hit points allow Scarabs to do the full 125 amount of damage to them, which is why Reavers are a good counter to Ultralisks. In the late-game Reavers are also effective at defending expansions, especially in conjunction with Photon Cannons and High Templar.

As in other matchups, Reavers are often used for worker harassment versus Zerg. Corsair/Reaver is uniquely reliant on Reaver-based harassment and Shuttle play throughout the mid-game.

Reavers are primarily used as harassing units in the PvT match up, picking off stray Siege Tanks and assaulting mineral lines when used with effective Shuttle micro. A Protoss user who selects the Reaver as his tech of choice will also use it to stop Terran pushes in the early game, as they can be particularly effective against Vultures.

Reavers are ineffective alone due to their speed and slow cooldowns, thus travel with other Protoss troops. Because Siege Tanks outrange Reavers, Protoss players must be careful in controlling the Reaver/Shuttle combination.

Reavers are a staple of PvP play, being used not only to defend expansions and allow players to expand safely, but also to harass the enemy mineral line and kill many probes, leaving the Protoss opponent with a significant economic disadvantage.

Reavers are also used in army engagements, being a component of a standard early-midgame PvP army alongside Dragoons. They are often the highest priority target in battles, as their high damage and splash can easily turn the tide of any battle. Shuttle micro is essential for using Reavers in battles, as picking up the Reaver at the correct time will allow it to dodge incoming Dragoon fire. Reavers start to become obsolete once Psionic Storm is researched, since storms negate, to a great extent, Shuttle micro. Note Reavers themselves can sustain up to two Psi Storms.