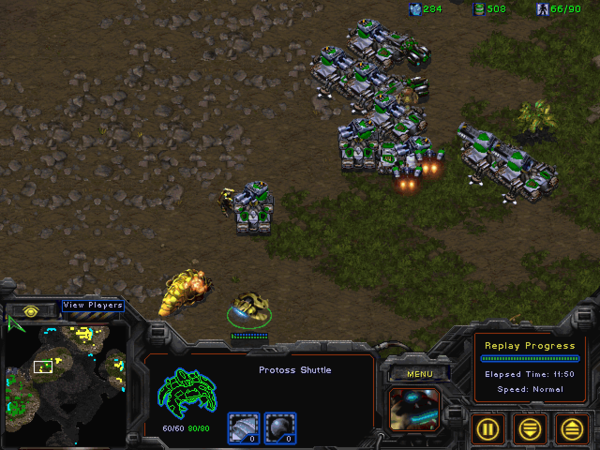 The Reaver drop is a technique popular in all three Protoss matchups. Building Reavers is a significant investment, which forces any Protoss player to maximize their damage output. The Reaver's slow movement can be overcome in combination with a Shuttle to increase the unit's mobility and shield it from damage. A Reaver-Shuttle combination can be used to harass an enemy base, for defensive applications or as part of the Protoss army.

Regardless of the usage (harassment or ordinary offensive unit), the Reaver will always be carried within a Shuttle: it will only be dropped to fire a Scarab onto a specific target. Targets are usually chosen in order to maximize the Scarab's splash damage upon other enemy units or buildings. To avoid losing the Reaver, it can be picked up into the Shuttle after firing each shot if needed.

Some techniques can be applied in all three match ups. A Protoss should consider the following characteristics of Reavers and their Scarabs, while adapting to the current game situation.

Reavers are usually part of the early game against Terran. In most cases Reaver drops are used to kill the Terran, or at least to deal enough damage to gain a significant advantage. However, the Reaver is not limited to being a harassment unit only. Especially against aggressive openings such as Fake Double Builds or Two Factory Builds it can be used to thin out advancing Siege Tank lines. The only opening that efficiently counters an early Reaver drop is an early Vulture drop by Terran, or any other opening which allows the Terran to produce Wraiths early on.

Any Terran army will consist of mostly Siege Tanks and Vultures. If the army is still moving, meaning that the Siege Tanks are unsieged, a Reaver's longer range can be used to target down stray units, although the Reaver should be handled carefully.

If the Terran sieges his Tanks, the Reaver can be used to thin out the Tank line. In most scenarios, a Protoss will harass the Siege Tanks with two Zealots and one Reaver. The Zealots (one at a time) are dropped first, to draw the Tank's fire on them, the Reaver will be dropped shortly afterwards and will focus on clumped units. This technique is mostly a combination of Reaver-Shuttle Harass and Zealot Bombs. To avoid this the Terran may simply unsiege. Dragoons can be placed close to the set-up.

Siege Tanks have a rotation time. This means that it takes a few second for Siege Tanks to turn toward their target. This rotation inertia can be abused by the Protoss to minimize the likelihood of Tanks focussing on the Reaver after killing a Zealot. Doing this buys a few seconds of extra time to pick up a Reaver after shooting a Scarab. 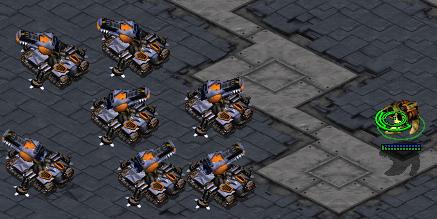 Scarabs traverse terrain in a rather complicated fashion. When they have a target set, they treat other units and buildings as obstacles and behave exactly like a melee unit when trying to reach its target. Once a Scarab comes in close vicinity to the target, it exlodes, dealing splash damage. 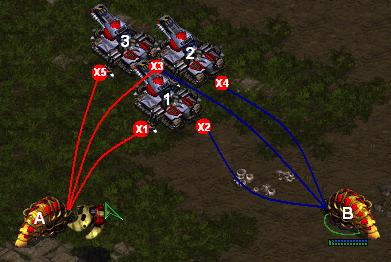 Generally, if several units are adjacent, a Scarab should be launched in such a way that it slides along the edge of a unit in order to reach another one, illustrated by the picture below: 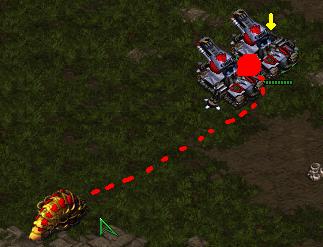 The rear drop is one of two ways to use the Reaver-Shuttle combination to destroy a Terran army. In this case it doesn't matter whether the Terran army is sieged up. Usually, the main Protoss army attacks the Terran, while the Reaver is dropped on the edge of its firing range in the rear of the incoming Protoss army. Ideally, the army will soak up the first volley of the push, while the Reaver targets clumps of units and clears them up as fast as possible. However, this technique works most efficiently against unsieged Tanks and an army in motion, since a Sieged Terran can manually target the Reaver more easily.

The front drop technique is the second option for a Protoss using the Reaver-Shuttle combination against a Terran push. This works best against a Terran with Tanks already in Siege Mode. The Shuttle is used as spearhead of the incoming Protoss army. Usually Zealots are dropped first and the Reaver is only dropped after the Terran army already shot its first volley. The larger a Terran push is, the harder this technique is to effect, as a vast part of the Terran army will be secured by Goliaths or Turrets.

Reavers are a staple unit in the Protoss mirror. While in PvT they are almost exclusively used to harass, in PvP they are a main fighting unit in early/mid-game. One of the most common PvP tactics involves getting 2 Gateways, a Robotics Bay, Shuttle, Observer and then Reavers, while continually increasing the Dragoon count.

In order to use Reavers in a battle where the opponent has Dragoons, the following techniques are used:

Shuttle speed remains the highest-priority upgrade, as it will also help your other forms of harass.

Over the course of a game Reavers usually lose value. They're easily countered by the High Templar's Psionic Storm, as the Shuttle and the Reaver are usually in the same spot. Once High Templar are fielded, Reavers are mostly used in drops.