"Recently the Protoss have found that the ability to rapidly bring more fighting forces to war zones is invaluable. The Recall ability creates a tear in the fabric of space-time, and any friendly units that enter the swirling vortex will instantaneously appear next to the Arbiter that initiated the effect."

Recall is staple in PvT late game, as the instantenous transportation exploits the Terran's army's lack of mobility. In the PvP and PvZ match-up, Recall is less common. In both match-ups the high gas requirement of the Arbiter usually loses to the much needed High Templars. Also, these enemy's armies are mobile enough to catch up with your Recall, in which case your forces severed from your main army and are quickly taken out. In the rare case Recall is seen in these match-ups it is usually used for a tactical strike, such as taking out an island expansion.

Whereas Stasis Field usually is the prioritised spell when dealing with a Terran army, Recall may be researched if the Protoss is confident he can hold off the Terran push. A Recall can be devastating to a Terran main base, as key buildings can be taken out quickly. Recall is especially effective when dealing with island expansions as the Terran usually doesn't have the means to send a comparable force of reinforcements. 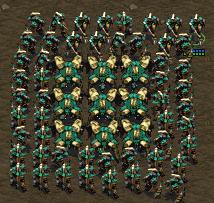 When recall is used in the center of this formation

It is seen that the outer line of zealots was not recalled. This is because they are only partially within the 138X138 boundary of recall. Units not entirely under this area are not affected. 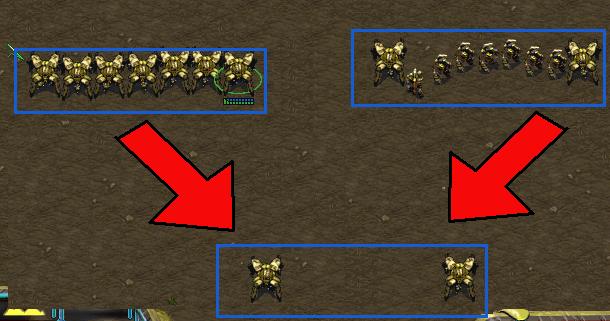 In this one we can see that arbiter was able to recall a 138 Width of Zealots but only 128 Widht of Dragoons. This simply means that a unit has to be totally under the recall zone to be recalled.

Final note: Does not count the positions of unit before recall because after recall all positions will be mixed.