Property "Has creator" (as page type) with input value "지근영 (DreamReaver),</br>변종석 (Rose.of.Dream.)" contains invalid characters or is incomplete and therefore can cause unexpected results during a query or annotation process. 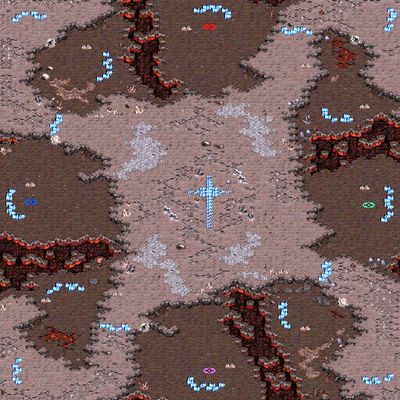 Neo Requiem was a map that was played extensively in 2005, and then brought back for the 2008-2009 Proleague, as well as for the GomTV Averatec-Intel Classic Season 2. The map is characterized by the large cross made by minerals in the middle, as well as the "Islands" in the four corners of the map that are only accessible by either glitching a mining unit through, or by mining all of the minerals that are in the way. There is a ramp from the mineral only expansions in the corners to the gas and mineral expansion that is below the mineral only. In the later 2008-2009 edition, the tiles were edited such that scarabs and Zerglings could pass through the mineral line at the natural, leading to one of the most famous games on this map in 2008, sAviOr vs TT.