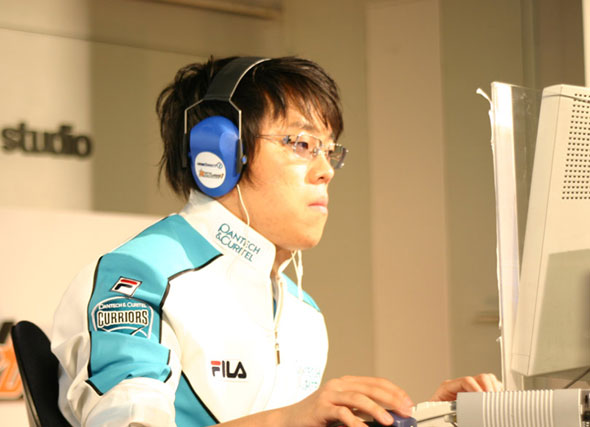 He played Terran in StarCraft II.

He currently plays in the amateur Brood War leagues and streams in Afreeca.TV.

Rock's televised debut dates back to 2003. He was a member of the team Toona SG (became Pantech & Curitech Curriors and later WeMade Fox). He qualified for several OSLs, but quickly earned the reputation of a filler, someone who would barely make the Starleague but never make an impact in it. His unstable performances, his daring ceremonies and his slightly unusual exterior have attracted ridicule and admiration alike. In his time in the WeMade Fox progaming team, he was one of the stronger personalities that led morning exercises and even commentated in-house games.

His early ventures in the OnGameNet leagues were marred elimination during the group stages headed by very strong players. In his first OSL, EVER 2004 OSL, he took a game off of July before exiting at the hands of XellOs and July in a tiebreaker rematch. In his next qualification, in the So1 OSL, he ran into July once again and BoxeR. He couldn't get past both players and he went home 1-2 again.

In the next season, he qualified for the first of 4 seasons sponsored by Shinhan Bank. This time he was able advance into the elimination bracket, even beating iloveoov in the process. However, in his elimination series, a recurring theme happened as he met July and was eliminated 2-0. During the second Shinhan OSL, Rock met July, GoRush and Sync. Stuck in a group of former champions, Rock defeated his constant obstacle July and GoRush to advance to the elimination stage. Once there, he fell 2-0 to an in-prime IriS. The level of success continued for Rock into the next season. However it did not mean that it was smooth sailing for Rock. Disaster struck as he ended up with a 1-2 record in the 24-man Dual Tournament. As a result, he was sent down to a Wildcard round. He advanced along with IriS to the round of 16 over the Zerg player Jy. He reached the quarterfinals where he fell to the fourth placer, GoodFriend.

For a long while, this was his best placing in the OSL. He either did not qualify or got eliminated as the progaming scene moved forward to the TaekBangLeeSsang era. It was not until two years later, in the 2008 EVER OSL that he would catch a break again. He advanced out of the Group Stage 1 with a record of 2-1 into a second group stage. In Group Stage 2, he advanced, notably with FlaSh and beating Sea and GGPlay. He managed to match his best Starleague placement by getting to the quarterfinals. In the quarterfinals, he was matched with July again. Unfortunately, he could not overcome his old obstacle, who became the eventual champion and a Golden Mouse holder. This also marks the last time Rock came out of the group stage.

Rock entered the army in 2010 and applied to ACE where he was accepted. He joined the team in June.[1]

He is known for using the 2 Base Carrier opening against Terran with some stubbornness, sometimes even on some maps where carrier play is deemed unsuitable or weak.