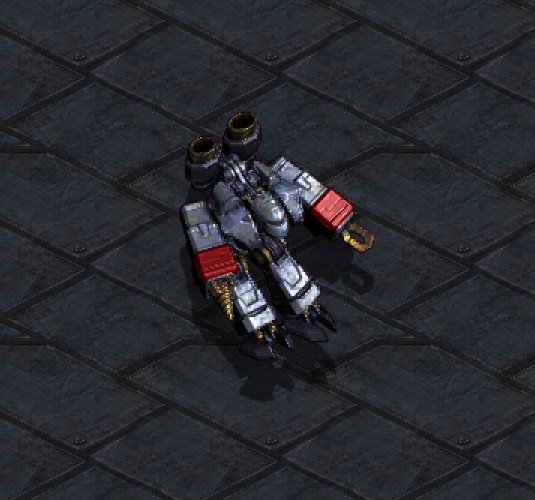 The SCV (Space Construction Vehicle) is the Terran worker unit. It harvests resources, constructs buildings and can repair all Terran mechanical units and buildings. As a building is constructed, the SCV must remain at the site until complete, and if killed, the building's construction will halt. Repairing costs about one third of the initial cost (in Minerals and Vespene Gas) but varies slightly depending on the target unit/building.

Uniquely, SCVs are counted as both a biological unit and a mechanical one. This means that they can be repaired by other SCVs and healed by Medics but also damaged by Irradiate or caught in a Lockdown. Their acceleration is slower when compared to Drones and Probes, making their movement more jerky and difficult to control when used in combat. However, they have 20 more HP than either Drones or Probes, making the enemy have to pull two workers to kill a single SCV. This extra 20 HP also enables them to kill an unmicroed Marine. Although they are stated to have a range of 1, their attack range is 22 pixels shorter than that of the Zerg Drone and the Protoss Probe, and their 10-pixel ranged attack is virtually a melee attack.

Contrary to popular belief mass spamming attack move or right click on another unit does not make the SCV attack faster. The attack animation appears faster but the attack rate is still the same. That doesn't mean it has no use. SCVs have the same range as Probes and Drones but the problem is that an SCV decelerates first before it attacks. This is why a properly microed probe or drone could beat an SCV 1v1 if the SCV is not microed. Spamming attack move/right click allows the SCV to attack without decelerating. So as long as you micro your SCV it will not lose to a microed Drone/Probe. On single player I have tested 2 SCVs fighting each other where one is on attack move while the other I microed. The microed SCV won for 2 fights. At first I thought maybe it means the attack rate is sped up but I conclude that since the microed SCV doesn't decelerate right before it attacks instead of attacking faster it just got the first hit. The same could be said for repairing. Spamming r/right click makes the repairing animation faster but the repair rate is still the same. I have tested this also on single player with 2 command centers where one is being microed.

An advanced technique which is used with SCVs during the early game is if you spam right click on a mineral until the SCV reaches it, your mineral mining rate is increased. As the same reasons written above, I believe this is not because the SCV moves faster or mines faster, its because right before an SCV mines a mineral it decelerates so spamming mine allows it to mine without decelerating. This can be noticed when you build your first supply depot at 9/10 instead of having 96 minerals you have 104.

Naturally, SCVs are used to gather resources and to construct all the buildings in a Terran's base, but they are almost always used as an early game scout to allow the Terran to see the opponent's Tech. They may be sent out to a remote location of the map in order to build a Proxy. They can also be used to scout for expos during the mid/late game. An annoying trick is to leave a scv at an expo and your opponent wont be able to expand there. SCVs may also be used to repair buildings or units that are under attack. In addition to their given abilities to gather resources, build and repair, SCVs are used to jump units such as Vultures across minerals that may be on the map. (eg: Destination, Monty Hall) SCVs are a very cheap way of scouting besides scan. SCVs are also used in Bunker Rushes but can be used in any sort of timing all in attack. The SCVs draw a lot of fire.

The SCV is used in Bunker Rushes with either to just build a bunker to disrupt the Zerg or a full blown Bunker Rush. Defensively the SCV is weak due to the Lurker's linear splash damage and the normal attacks that most of the Zerg have. An SCV can start building an Engineering Bay or Supply Depot at the Zerg's natural to delay the expansion if the Zerg intended to go 12 Hatch. Even without a building moving around and blocking the hatchery's path is another way to delay the Zerg's expo. If you go 2 port wraiths a trick which comes in handy is bringing back the wraiths which are damaged and repairing them. The same could be said with plagued vessels. Bringing some back to be repaired. Another usage for SCVs is having one outside your natural if your expect some sort of Speedling all in attack or backstab. This can be further used when moving out with your first army to scout the opposite direction in case of a stab or in front so you don't get caught out of position. It is common to place SCVs on the ramp in front of your Marines to help fight Zerglings and Zealots. The SCVs act as meat shields to take the damage while your the Marines deal damage. Use hold position to make sure the SCVs don't run away. Sometimes a Terran will float a Barracks over two SCVs on Hold Position, so his Zerg opponent can't enter his base with Zerglings while he techs.

SCV are typically used defensively but can be used offensively. When a base is dropped, depending on the number of units dropped, the SCVs will be sent to attack. The best idea is to spread them out fairly well and aim for the Siege Tanks. The SCVs alone do not do enough damage to stop the push but the enemy's own Siege Tanks's splash will help kill their own units. In the early game and mid game, SCVs can be used in a timing push to help kill the enemy. But it can also be used to break a contain by letting the scvs take the first shots. A common usage of SCVs in TvT is to build turrets around the map to spot for drops. Whenever you see your opponent's tanks sieged without any turrets or Gol/Vult support. You can use a Dropship to drop SCVs on top of the tanks such as a Protoss will drop zealots on the tanks.

The SCV's high health allows it to do fairly well vs Protoss in the early and mid game defensively. Because Dragoons, which are the staple of Protoss' army in PvT, deal 20 points of explosive type damage and SCV being a small unit having 60hp, it takes them 6 hits to kill an SCV, making them a great addition to early-game combat. If an enemy breaks through with dragoons the best tactic is to grab twelve and try and catch the Dragoons in a physical hold so they can't escape. If you do not stop their movement, the Dragoons will keep dancing around and picking off the SCVs slowly. In most pushes, a few SCVs are required to build Turrets which helps kill Observers and prevent the Protoss from dropping on top of your tanks if they have a shuttle out. Supply Depots or any other buildings can help take damage or block units from getting too close. They are also used to repair tanks and draw fire. In the event of a Recall and a Stasis blocking entry into the main, SCVs can be stacked and drilled where the stasised units are to move/bug them away and open the entrance up.

Please note that the SCV Repair Rate is affected by the total health of the unit it is repairing, as well as the build time of the unit. Additionally, there's a flat 90% modification across all rates. The formula is as follows: Repair Rate = 0.9 * (total health / build time denominated in seconds). Please find the formula applied to Bunkers and SCVs below.

With the knowledge of Marginal Repair Rates, we can understand some common breakpoints encountered as Terran by way of looking at unit DPS. I prepared a table below specifically for the bunker since it's the most commonly repaired unit, but this can be done for any repairable unit (just remember to take damage type and unit type into consideration when running your calculations). When you're reading the table, the Marginal SCVs Needed column is the most useful data, which is the Effective DPS / Bunker Marginal Repair Rate. If a dragoon is attacking a bunker, one SCV is sufficient to exceed the dragoon's dps; however, eventually your SCV will completely repair the bunker and stop repairing. Likewise, one SCV is sufficient to exceed the dps of two marines. One SCV is insufficient to exceed the dps of four drones; however, the bunker will only take the following dps: (4.33 [drone's effective dps vs bunker] * 4 [number of drones]) - 16.58 [marginal bunker repair rate] = 0.74. As a result, the bunker will take 0.74 dps while being repaired.