Samsung KHAN is a professional team with a strong history in Teamplay and has brought forth strong Protoss players such as Stork and JangBi.

Samsung is one of the world's largest conglomerates, and is most famous for its electronics manufacturing.

The KHAN team contains notables such as Stork, who performed extremely well in the individual leagues but could only grasp one gold at the 08 Incruit OSL; and JangBi, who is a Protoss player who performed well in the 2008 seasons of MSL and GOM leagues, famous for his PvT and Psi Storm usage. Samsung has a tradition of strong 2on2 teams, which was essential in their 2008 Proleague win. 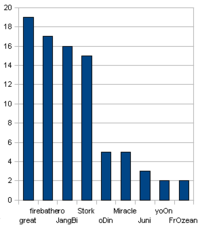 KHAN started out the season in superb form but that has slowly degraded through the rounds. In the first two rounds, they tied Hwaseung's excellent score of 15-7. In Winner's League they placed bottom five, and since then have been struggling, to the extent that key players have not been put in the last weeks' game lineups, almost forfeiting their playoff spot to the KTF MagicNs. In total, a 10-12 during r4 and r5 was enough to finish 6th, allowing them to compete in the playoffs. This was partly due to great emerging as a new key player for the team.

With STX SouL coming off a 10-1 streak in r5, Samsung was clearly the underdog in this match that was played on two days with two separate Bo7 games. If the teams were tied 1-1, a single "super-ace" match was to decide. On day 1, Samsung narrowly won 4-3, with great winning the Ace match against Calm. Day 2 saw STX winning 4-1, so a super-ace match had to decide. In the super-ace, JangBi managed to surprise Calm and sent Samsung into the next round of the playoffs.

Also against CJ Entus, Samsung was thought to be at a disadvantage. However, with favorable matchups, they managed to win day 1 with 4-2, claiming an early lead. On day 2, they achieved a 3-1 lead, but were unable to capitalize on this - in two ace matches, one regular, one super-ace, EffOrt proved to be stronger than great and Stork respectively. Samsung thus finished the Proleague Season as 4th.