The Hungarian team sas was a foreign BW clan in the post-SC2 era. Due to its strong roster sas was able to win several of the most notable titles at the time. In 2012 the team managed an own invitational tournament series.

Sas was formed by Ace, Fatdrone, Pez and zimp on September, 28th 2009 after the Hungarian ELTE LAN 3. It was able to gather some notable Hungarian players from the beginning. In its early days sas. entered the BWCL, where it took over the spot of the Polish team wD). After the StarCraft II Beta the clan also participated in ICCup's clan league.

In its first days sas. wasn't able to advance into the top divisions of both BWCL and ICCCL. Throughout the years many notable Hungarian players joined, among them Kashu and Sziky. Over time sas. was able to finish BWCL first twice, the BWCL Cup in season 38 and ICCCL season 18. During mid 2011 the team eventually became one of the strongest foreign clans, with the top three of Kaal's International StarLeague being part of their roster.

Due to inactivity sas. had to share a spot with Team Noobs in Gambit Cup Season 1, which they consequently won. After this the clan started to recruit international players, such as dsaqwe, Astro and Zaraki to cope for the loss of Ace and Kashu. The Spanish Zerg replaced pez as leader after Gambit Cup's second season.

In September 2012 sas retired from ICCCL due to inactivity. 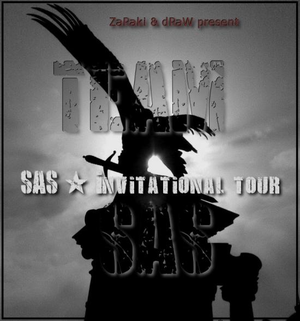 The sas Invitational Tournament series was sponsored by sas.ZaRaki. The opening event in the series was hosted in April 2012[1] and featured eight players of the Hungarian team sas. Only 2 tours were organized in the series, having a maximum 32 players.

Staff for the invitational tours: