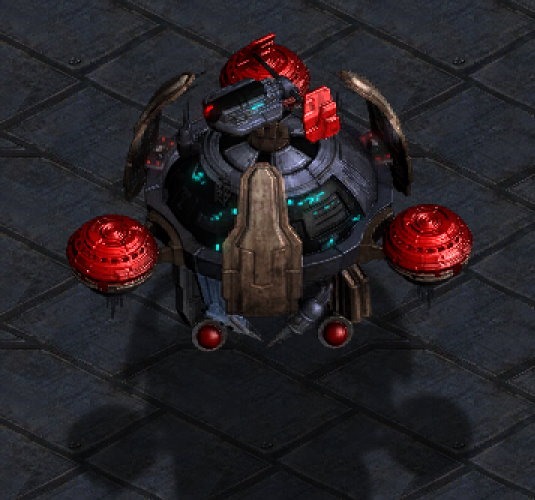 It possesses three abilities. It comes with Defensive Matrix, an ability which adds 250 HP to the unit. Irradiate and EMP Shockwave can be researched at the Science Facility. Irradiate deals 249 damage over 25.2 seconds to biological units, and deals splash. EMP Shockwave reduces shields and energy of the affected units to 0. An energy upgrade can also be upgraded for 50 extra energy.

These are researched at the Science Facility.

The Science Vessel is considered a staple in TvZ. It provides reliable detection for the Terran's Marine, Medic forces, and supplements it with Defensive Matrix, while damaging or killing Zerg units with Irradiate. Irradiate is generally used to kill stacked Mutalisks, Lurkers, Guardians, and especially Defilers, and it is used to soften Ultralisks. Defensive Matrix can be used to break Zerg defenses. A Marine with Defensive Matrix will soak damage, while the other forces destroy the defenses. A Terran with a "Cloud" of Science Vessels is a formidable force, as Irradiate is capable of killing off almost every essential Zerg tech unit quite quickly, while losing only energy.

The Science Vessel, being powerful and expensive, will be the target of Zerg Scourge and the Defiler's Plague. Terran players must keep their Vessels alive, and the Zerg needs to thin out the Science Vessel count. Plagued Vessels can be easily dispatched by a lone Mutalisk.

The Science Vessel is an effective unit in TvP. Along with providing detection against Dark Templar, the Vessel's EMP is a solid counter to the Arbiter and the High Templar. EMPed Arbiters are unable to Recall or Stasis Field, and EMPed High Templar are unable to use their Psionic Storm. Science Vessel's detection ability is also very useful to help Goliaths to snipe Observers.

EMP can also be used with limited effectiveness against Protoss shields. Due to its small area of effect, and the effectiveness of Vultures, it is generally considered negligible in usefulness. The Science Vessel's EMP is better used against Arbiters.

Since Protoss buildings are also protected by shields, an EMP can instantly halve the building's health. Normally, buildings would take two Nukes to destroy, but an EMPed building is destroyed by only one direct Nuke. However, Ghosts are rarely seen in this match-up, so EMPing buildings tend to be of little use.

In the rare case that you see a Dark Archon, be aware that Feedback can kill a Science Vessel with full energy, so it is important to spend your energy often; also beware of Mind Control.