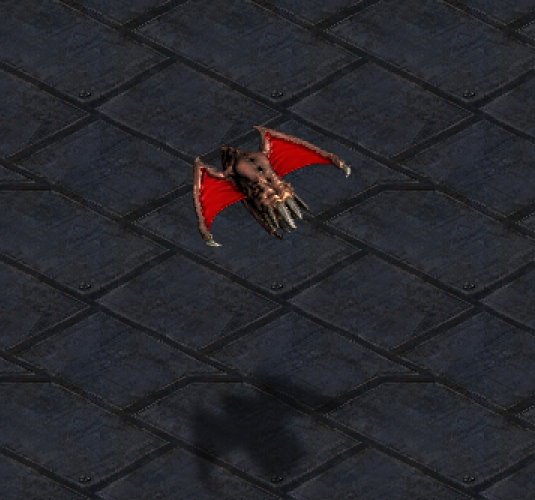 Scourge are suicidal Zerg anti-air units that require a Spire and thus Lair-tech to build. They serve as the Zerg primary airborne anti-air with Mutalisk. A pair of Scourge is spawned from a single morph of Larva, like Zerglings. Because Scourge deal 110 damage each, it makes them very cost-effective. This is particularly the case when Scourge are used against expensive units that rely on their speed units for their survivability, like Science Vessels. Scourge are also effective in dealing damage in a short amount of time, as in the case of drop attacks, where Scourge destroy the transport unit before it can deal any significant damage.

Scourge are fairly fast but have low health, at 25 hit points, meaning they can be picked off with by moderately quickly firing opponent fire before they reach their target, much like Zerglings. Scourge are unique in that they are the only air units that are melee: that is, they are the only unit that requires making direct contact to attack the opponent.

Due to their programming, Scourges anticipate targets' flight in advance shortly before they would hit their target without reacquiring them. Exploiting this allows players to outdistance them. In order to prevent the exploitation of this by opponents, many Zerg players fly their Scourge directly to the target with the move command and only press attack when the Scourge have contact with the target. Zerg players also have to regard that Scourge "fire" may focus on a single target like every air unit. Stacked Scourge are particularly useful in attacking a single target together, which can be wasteful for the Zerg as the excess Scourge units die unnecessarily upon hitting the target. As such, Zerg players often try to keep their Scourge well distributed. Zerg players will also sometimes group and clone Scourges to better them in a more effective manner, thereby only targeting the necessary number of Scourge needed to kill the enemy unit.

Scourge are commonly used in all match-ups, whether for offensive purposes during a battle, or defensively when anticipating a transport unit. Because of the tech tree requirements, Scourge are usually not available until the mid to late game, but depending on the build order desired, may be built earlier.

Scourge are commonly used against Mutalisks, one of the most powerful units in the ZvZ matchup, because of their cost effectiveness. It costs only 25 minerals and 75 gas to build two Scourge, whereas a single Mutalisk costs 100 minerals and 100 gas. Further, the damage is dealt immediately, compared to the many attack volleys Mutalisks would need to deal to do similar damage onto the enemy Mutalisk. Additionally, it takes only a single Scourge to bring an enemy Mutalisk down to 10 hit points, leaving it extremely vulnerable to being finished off by the Zerg player's own Mutalisks force.

This cost effectiveness dwindles as enemy Mutalisk numbers grow, because more Scourge will be destroyed in one volley fire by the Mutalisk stack, before the Scourge can manage to reach their targets. As such, their low health makes them a weak unit compared to a larger group of Mutalisks. On the other hand, without the Scourge closing in on the target before attacking, when Scourge and Mutalisk numbers are small, it is easier for Mutalisks to outmicro Scourge.

Mutalisks are equally fast as Scourge with regards to movement speed. Mutalisks can simply run but their short range makes it difficult for the Mutalisk to micro against the Scourge, especially when the Scourge have support. At the very least, Scourge can reliably draw shots from other units.

Since the Spire is commonly acquired early on when producing Mutalisks, Scourge can also be built without additional technology advancements. As such, in these early situations, a pair of Scourge may be built rather than Mutalisks. The Scourge build times are shorter than that of the Mutalisk, so the Zerg player will have access to Scourge sooner than a Mutalisk. Additionally, the Scourge may be preferred for scouting and to kill enemy Overlords, thus supply blocking opponents. The Scourge's suicide explosive attack destroys the opponent Overlord much faster than a few Mutalisk would be able. In the meantime, the Zerg player can better develops economy and build an advantage in production.

In the Terran matchup, Scourge are most commonly used to destroy enemy Science Vessels and Dropships. As these Science Vessels are usually protected by the opponent's army, it is important to draw fire with other units such as ground troops like Zerglings while targeting the Vessels. This prevents the Scourge from being destroyed before reaching their targets. Note two Scourge are needed to kill either a Science Vessel or Dropship. When the Vessel timing is very important, like in the TvZ 9 Minute Push, many Zerg players will try to stack their Scourge with their Mutalisks when targeting the first Science Vessel. This technique is called Mutabombing.

Secondly, Scourge are used to keep enemy Dropships from reaching the Zerg bases. To this end, they are commonly placed along viable drop routes such as the boundaries of the Zerg base, along with Overlords to increase the Scourge sight range.

When the Terran builds Valkyrie+Marines and Medics, Scourge, in combination with Mutalisks, are used to snipe Valkyries before they can reach critical mass. Mutalisks can draw fire while Scourge deal the majority of the attack. These Scourge should engage Valkyries diagonally when possible, as opposed to head-on, because it will then take the Valkyries longer to kill the Scourge. Note two Scourge are needed to kill a Valkyrie.

When the Terran goes Battlecruisers, five Scourge are required to take down a Battlecruiser. However, this becomes increasingly difficult as an increase in the number of Battlecruisers will be able to snipe Scourge in one shot before the Scourge is able to reach the Battlecruiser. Thus, extra Scourge must be sent to target a Battlecruiser when a pack of them are available to defend one another. A Pimpest Play by H.O.T-Forever performing this task took the name of Divine Wind.

When multiple Wraiths are used against the Zerg, their rapid fire can counter a small pack of Scourge. Mutalisks are frequently necessary to support the Scourge as they can drawn some of the the fire while Scourge fly in, unopposed. Note one Scourge attack will leave a Wraith with 10 hit points, such that Mutalisks can finish the Wraith off. In the absence of Mutalisks, two Scourge can be used to more quickly counter the unit.

There are a variety of usage for scourge against the Protoss. In the popular Fast Expand build orders, the Zerg will rush to Spire to counter Corsairs. This provides Overlord protection against Corsair harass and the ability to scout quickly against the Protoss while denying the Protoss from scouting the Zerg.

During the mid game, Scourge are vital if the Zerg player opts to build Mutalisk for harassment. Corsairs will easily counter the Mutalisks with its splash damage without the support of Corsairs, much like a pack of Wraiths.

Scourge are very useful in sniping Observers in the mid to late game. This does not deny vital scouting by the Protoss, but can significantly increase the effectiveness of burrowed Lurkers. This approach is very effective if the Zerg is trying to contain the Protoss within its base. A single Scourge can kill an Observer, thus forcing the Protoss to either attempt blind Psi Storms or to halt its advancement until more Observers are built.

Scourge are commonly used to stop enemy Shuttles, much like they are used to stop Terran Dropships, by placing them along viable drop routes. Protoss drops are particularly devastating when involving High Templars aiming to Psi Storm the mineral line.

In the late game, Scourge may be necessary to counter opponent Arbiters, both to deny Recall and to prevent its cloaking abilities on the battle field.