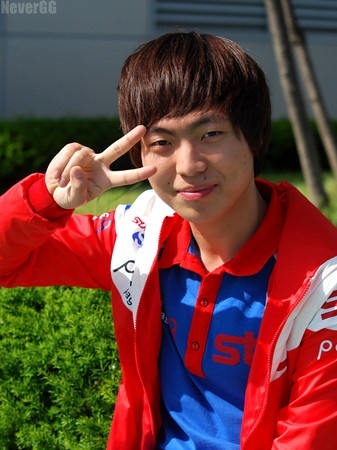 Kim "Shuttle" Yoon Joong is a StarCraft progamer from South Korea who played Protoss for STX SouL. He retired from StarCraft II on 21 September 2012 in order to fulfill his mandatory military service and currently plays in amateur leagues.[1]

Yoon Joong started playing Starcraft because he wanted to beat his seatmate. Eventually he improved enough to become the best in his city, enabling him to win about $300 in a middle school tournament. This led to his father accepting his career path as progamer.[2]

Shuttle has had a few scattered Proleague appearances on his team since the Shinhan Bank Proleague 2007. He is often overshadowed by his Protoss teammate Kal, who has had much more success than Yoonjoong and has appeared on his team’s lineup much more. Yoonjoong is perhaps most famous for his success in the TG-Intel Classic Season 1, where he defeated Violet and longtime Starleague veterans XellOs and fOrGG before losing to eventual tournament winner Jaedong in the semifinals. Since the TG-Intel Classic Season 1 though, he has yet to achieve much else. He has continued to have infrequent Proleague appearances, but has recently reached the Ro8 in the Averatec-Intel Classic Season 3 as well as make it to the Ro36 in the Bacchus Starleague 2009 before losing to Flash in the final set.

Shuttle is one of the most popular streaming broadcast jockeys, or BJs, on Afreeca, playing on the Fish server.[3]